Walking around Prague it’s impossible to miss the myriad statues as they can be found in pretty much any open space and on most of the older buildings. While it would take far too long, probably years, to write about all of them, this post is dedicated to a particular subset of statues that can be found in Prague – horses. No doubt most people will see most of the statues on this list on a visit to Prague, but today I’m going to give you a little bit of the history of some of the main ones.

1 – St Wenceslas – Václavské náměstí – Probably the most famous horse in Prague, and meeting point for locals and tourists alike for generations, this statue was sculpted between 1887 and 1924 by Josef Václav Myslbek. The image of Wenceslas is accompanied by other Czech patron saints carved into the ornate base – Saint Ludmila, Saint Agnes of Bohemia, Saint Prokop, and Saint Adalbert of Prague. The statue base was designed by architect Alois Dryák, and it includes the inscription: “Svatý Václave, vévodo české země, kníže náš, nedej zahynouti nám ni budoucím” (English: “Saint Wenceslas, duke of the Czech land, prince of ours, do not let perish us nor our descendants”). 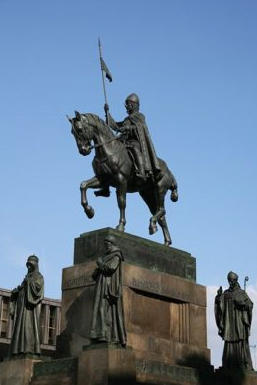 St Wenceles and the other Czech saints

2 – Jan Žižka – Vítkov Hill – This huge statue is 9 meters tall (almost 30 ft), excluding the pedestal. Weighing almost 17 tonnes, this is the world’s largest bronze equestrian statue. It was created by Bohumil Kafka, a Czech sculptor influenced by the works of Auguste Rodin, and he began working on the statue in the 1930s, however the outbreak of the Second World War halted any progress, and the casts even had to be hidden to prevent the Gestapo from destroying them. Bohumil Kafka would never see his work completed as he died in 1942. The statue was eventually inaugurated eight years later, in 1950. 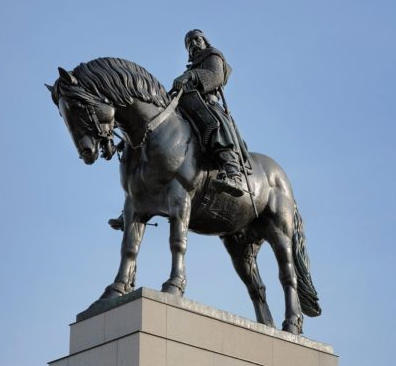 In the third courtyard of Prague Castle there is a Gothic bronze statue of St.George killing a dragon, which is a unique example of metal casting in 14th century. According to the tradition, the statue was cast by George and Martin of Kluj in 1373, although it’s possible that Parléř’s building and art workshop also worked on this piece. It is the first known statue in our country that wasn’t linked to a particular building and that decorated an open space. The statue stands on a high pedestal in the middle of a modern round, shallow fountain at a level created by J. Plečnik in place of a Baroque fountain which stood there originally and was taken down and moved to George Square in the 1990’s. The original statue is stored in the collections of the National Gallery, and the actual statue in the courtyard is a copy from 1967. 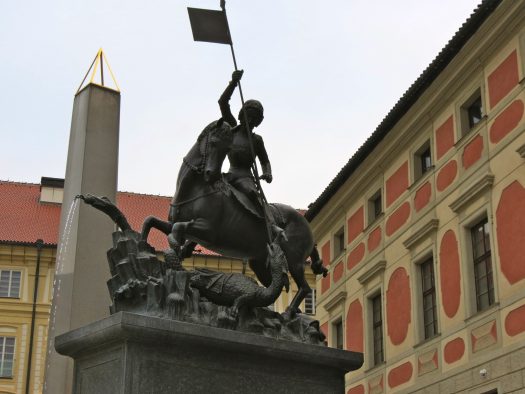 St George in the third courtyard of Prague Castle

4 – St Wenceslas and the Dead Horse – Lucerna Passage – Just a few minutes walk from Václavské náměstí is the entrance to Lucerna Passage, and probably one of the most interesting horse statues in Prague. This is St Wenceslas – just like in the nearby square – but this time riding and upside down dead horse! The statue is the work of David Černý, a Czech artist who is famous for his provocative works and creations. Černý never comments on his work, but many people believe this piece is actually a sly dig at former president Václav Klaus, a regular subject of Černý derision at the time the piece was created. 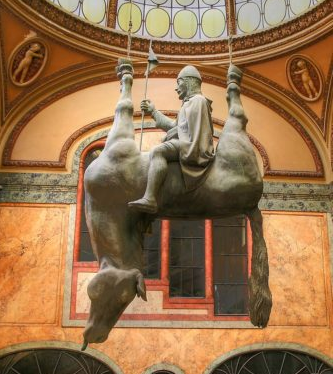 5 – Jaroslav Hasek – Prokopovo Namesti – Hasek is one of Prague’s most famous writers, with by far his best known work being The Good Soldier Svejk. Hasek used humour and absurdity to highlight his disdain for figures of authority, and this statue was built in his memory. His bust is riding a very oddly shaped horse – itself confusing when you learn that Hasek didn’t particularly like horses and never actually rode one. It is thought that the statue is actually more of a reference to Hasek’s love for alcohol, with the horse’s flat, square back resembling a pub table – the statue was even baptised with beer when it was unveiled in 2005. The statue is the work of Karel Nepraš and his daughter Karolína Neprašová, who completed the statue after Nepraš died. 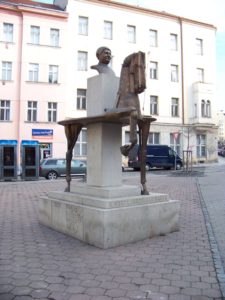 So, that’s the horses of Prague. If you would like to see more articles about the statues of Prague, let us know below and we’ll find some nice topics to cover.

If you’re tired of wandering around Prague, check out our recent post on beer gardens here;

And if you’re more adventurous, you can also check out our post about rafting trips here;