In the middle of Old Town Square stands a large and imposing statue of one of Bohemia’s most important religious reformers and martyrs, Jan Hus (c.1370-1415). If you’ve been on a Prague Extravaganza Free Tour, then you might already know something about this significant historical figure and the 15-year-long cycle of Hussite Wars that was set in motion after Hus’ execution by the Catholic Church on 6 July 1415, but read on and you might learn something further. In the Czech Republic, 6 July is still celebrated every year as a public holiday in commemoration of the life and work of this great religious leader and advanced thinker who died for his beliefs more than 600 years ago.

The Jan Hus memorial on Old Town Square, created by Czech sculptor Ladislav Šaloun in 1915, and dedicated on the 500th anniversary of the death of Hus. Photo by Aqwis

In the late 14th century Jan Hus was born in the town of Husinec in Southern Bohemia, from whence he took his name. Sometime around 1490, he enrolled in the University of Prague (known as Charles University today) where he eventually earned a master’s degree and began teaching, and then eventually earned the position of dean of the philosophical faculty in 1401. During this period, the university was undergoing a time of strife and disagreement between two factions there. On the one hand were the German masters who were staunch supporters of the Catholic Church, and who were regarded as standing against any sort of Church reform; and on the other were the Czech masters who were strongly nationalistic, and who were being strongly influenced by the writings of the English theologian John Wycliffe. Hus was an avid reader of Wycliffe’s writings, and he was greatly impressed by Wycliffe’s ideas about fundamental changes that he thought needed to happen within the Church.

Also at the beginning of the 15th century, the Catholic Church owned almost half of all of the land in Bohemia, and the Czech peasants resented the Church for its levying of heavy land taxes. Additionally, the great wealth of the Church at that time, and the Church’s practice among the high clergy of granting ecclesiastical privileges, dispensations, and indulgences in return for money, caused great anger among the poorer priests and Church officials. Because of this, the time was ripe for the appearance of a great reformer and, as it turned out, Jan Hus was to become that leader and to enjoy mass support of his ideas by the Bohemian population.

In 1402, Hus was put in charge of the Bethlehem Chapel in Prague which had been established by the reformer Jan Milíč several decades earlier, and where public sermons were preached in the Czech language rather than in the standard Latin of the Catholic Church. In addition to his duties at the university, Hus became heavily involved in public preaching, and he promoted a program of Church reform which included bringing the Church’s practices more in line with what he felt were the true teachings of the bible; stopping the sale of indulgences, a system by which people with money were able to obtain “forgiveness” of their sins for a nominal fee; limiting the power of the Church to strictly spiritual matters and removing its influence in government and landholding; and of replacing Latin with Czech as the official liturgical language of the Church in the Bohemian lands. From the pulpit of the Bethlehem Chapel, Hus denounced the Church’s practices, and openly criticized its leaders, actions which were to have grave results for not only Hus himself, but for the future of Bohemian Christianity.

As a response to this perceived rebellion, the Church ordered the confiscation and subsequent burning of all of Wycliffe’s writing at the University of Prague, and then in 1409 Pope Alexander V issued a papal bull which forbade preaching in private chapels, including the Bethlehem Chapel, an order which Hus chose to ignore. He was then excommunicated from the Church, though he chose to continue his mission of preaching and promoting reform, and gained vast support among the people of Bohemia. As a result of rocking the religious boat in this irreverent manner, Hus was summoned to the ecclesiastical Council of Konstanz to explain himself in 1414. Hus was anxious to put an end to the turmoil that was embroiling the Church at that time in order to begin in earnest a program of reform, and so he agreed to present himself before the council when he was promised safe passage by Sigismund of Hungary who was then Emperor of the Holy Roman Empire. 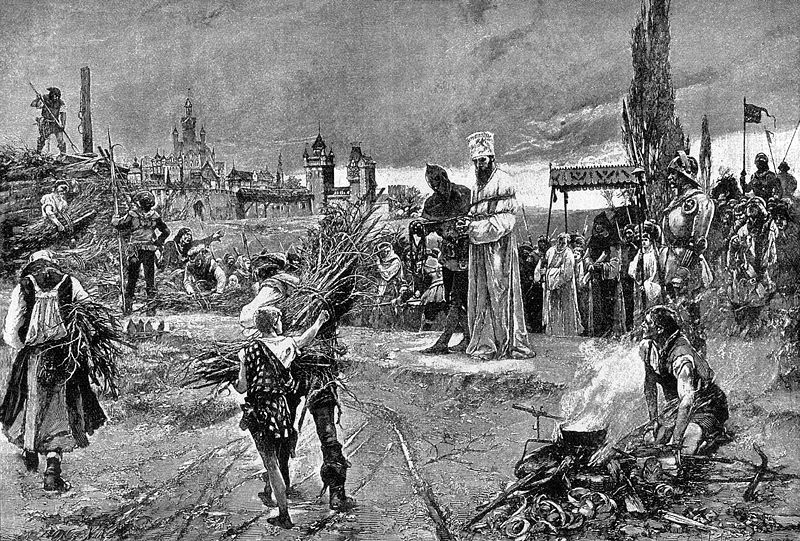 Hus arrived at Konstanz in early November, where he was at first at liberty to move about freely. But he continued to celebrate mass and to preach to the people which was a violation of restrictions that had been decreed on him by the Church, and so later in the month his opponents succeeded in having him imprisoned, a move which greatly angered the Emperor as it directly contradicted his sworn word. But the Church had no mercy for accused heretics. Finally on 5 June, 1415, Hus was put on trial. After a month-long ordeal during which time Hus refused to recant or to admit that his beliefs were heretical, he was sentenced to death and burned at the stake on 6 July. His death greatly angered his followers in Bohemia, known as Hussites, who separated from the Church and rose up in open, armed defiance, and for the next two decades Bohemia was engulfed in a period of bitter warfare against the forces of the Catholic Church and the Holy Roman Empire. But that’s a subject for another blog article sometime in the future…

The Battle of Vitkov Hill during the Hussite Wars, by Adolf Liebscher.