Living in Prague can be a wild life, and nothing says ‘wild’ like hanging out with lions and tigers and bears. Or jaguars and lizards and beers. The place for that is obviously Zoo Praha, one of the coolest and most widely acclaimed zoos not only in Europe, but also in the entire world. It’s defnitely the most beautiful zoo I’ve ever seen personally, covering 140 acres of varied terrain including a broad, flat wooded area along the river in Troja which is home to big cat and gorilla pavilions, as well as numerous rare and exotic bird habitats, and a lemur island; the rocky cliff face where the wild Himalayan goats and Barbary macaques play; and the upper elevations where you’ll find an African savannah with giraffes, zebras, antelope, and ostrich, and the newly constructed and vast Valley of the Elephants, among other things. It’s so incredible that in 2015 the Prague Zoo was named the fourth best zoo in the world by the TripAdvisor Travelers’ Choice Awards. 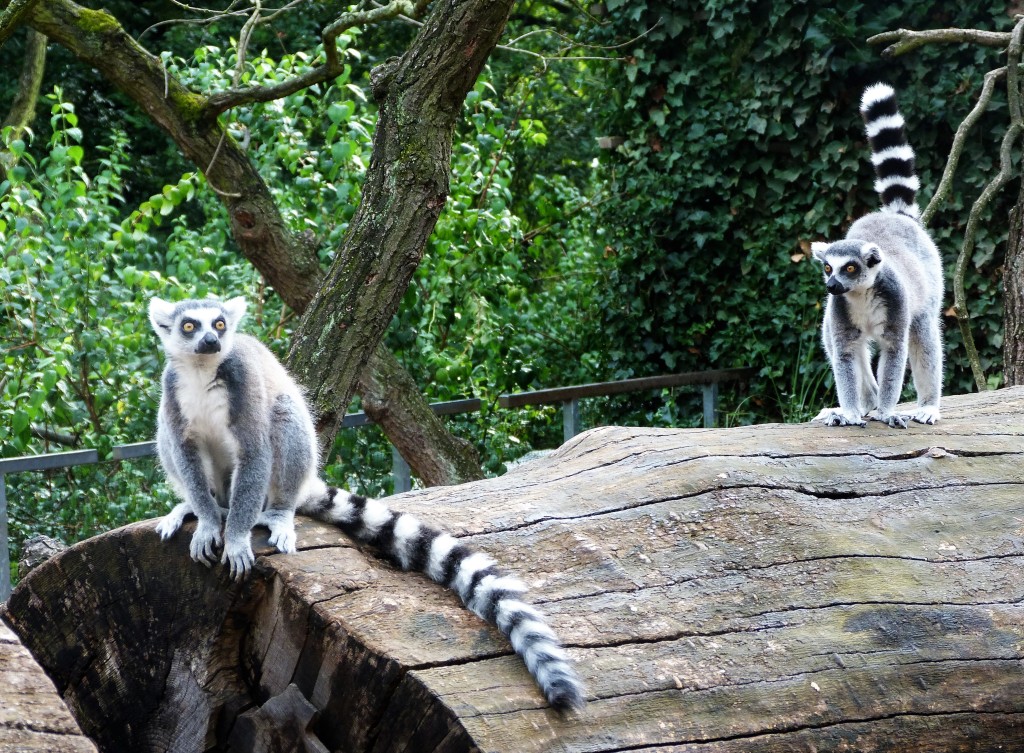 Lemur Island, where you can go inside the compound and hang out with them. When they’re tired of you, they’ll retreat to their private space where you can still watch them.

One of the most interesting things about the zoo is the part they play in international wildlife conservation and the preservation of endangered species. Prague Zoo is involved worldwide in a number of different wildlife protection programs. It funds and manages educational programs to promote knowledge and understanding of different world ecosystems and their inhabitants, and is deeply committed to the breeding and reintroduction into the wild of different species which are in danger of extinction. The chief example of this is the zoo’s work with Przewalski’s horse, a rare Central Asian species which was on the verge of annihilation by the 1970s and which only existed in captivity. In 2001 the Prague Zoo became responsible for the first ever artificial breeding of Przewalski’s horse in the world, and between 2011 and 2016, in cooperation with the transport services of the Czech military, they made a trip to Mongolia each year to reintroduce 3 or 4 horses into their natural environment where the species is now on its way to recovery. 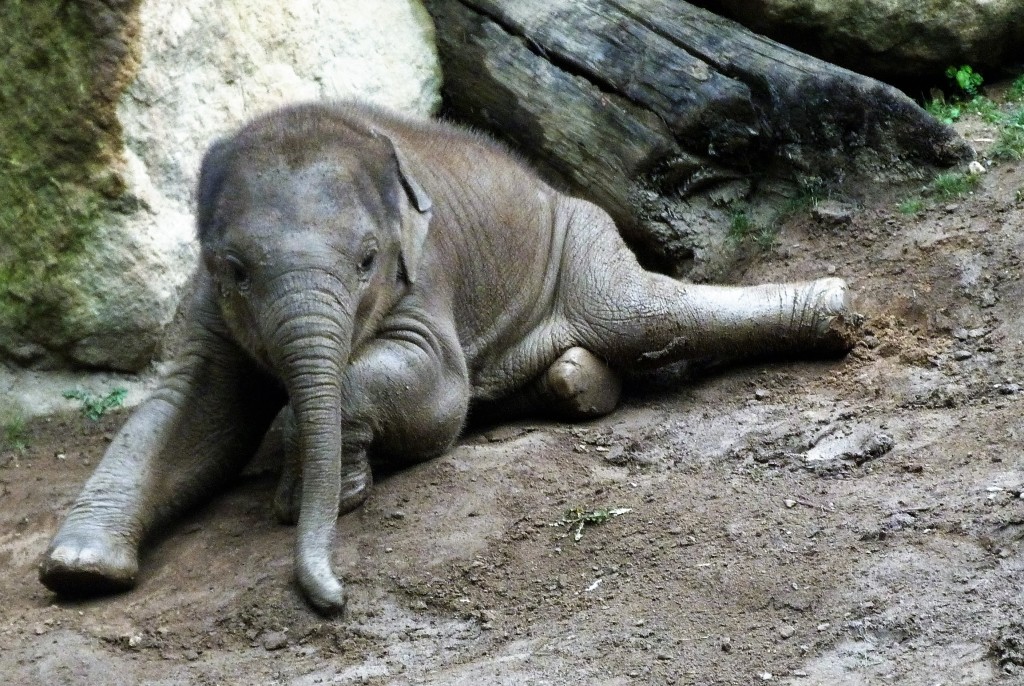 This year has also seen a great number of baby critters being birthed in the zoological gardens. Born as recently as just this past Saturday, 19 August, were a new aardvark and a black and white Colobus monkey, while earlier in the month was the birth of a Rothschild’s giraffe, another of the many endangered species that the zoo is helping to propagate. And the late winter and spring of 2016 saw a gorilla, an anteater, and a Tunisian spur-thigh tortoise become new additions to the Zoo Praha family.

As already stated, the zoo is huge, and there’s no seeing all of it in just a couple of hours. I’ve been there on many occaisions for six or eight hours at a time, and I’ve never managed to see everything I wanted to check out in a single day. To get an idea of what I’m talking about, check out their map by clicking on this link. The point is, plan on spending the whole day there if you want to get a decent idea of what the Prague Zoo is all about. 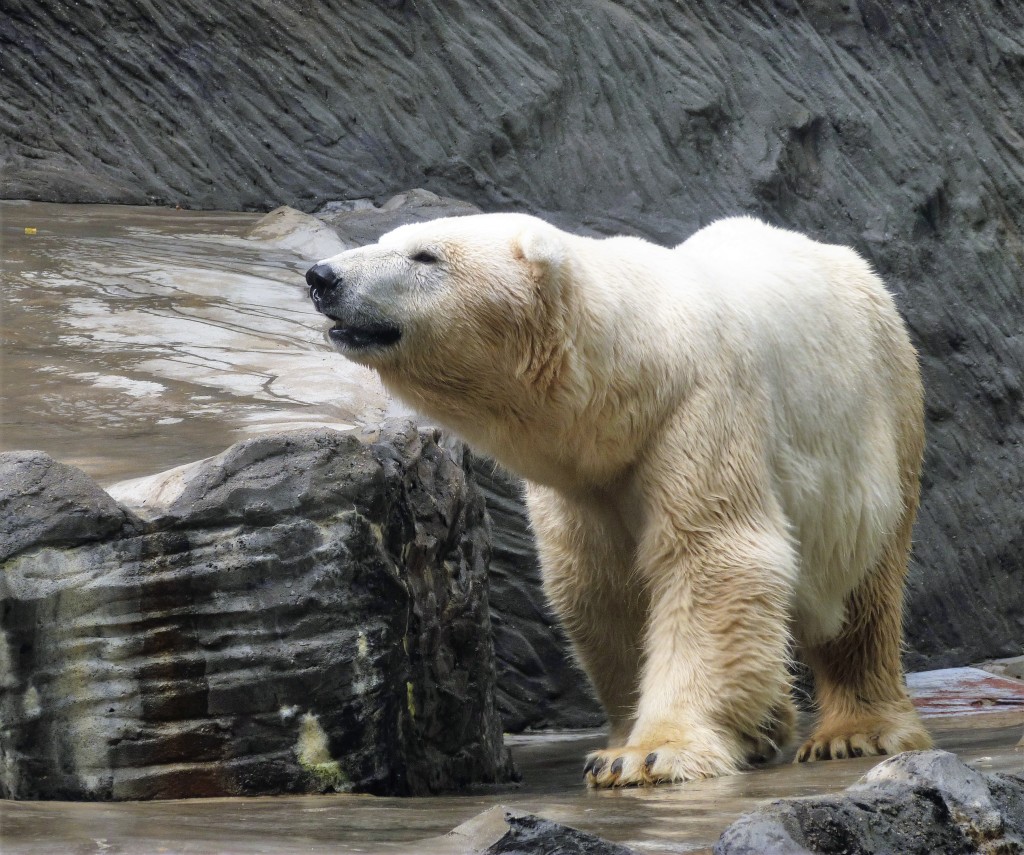 Tom is a playful bad-ass who enjoys playing tricks on his keepers when he’s not busy popping suddenly out of the water to startle children and unsuspecting dogs.

The educational aspects are super, with all of the informational placards and videos in English as well as Czech. And besides learning a whole bunch of stuff that you probably didn’t already know, you can also treat the day both as a wildlife camera safari and a walking and hiking experience. But if you’re not feeling up to climbing to the upper reaches of the habitats or wandering the many kilometers of footpaths, you can take the tram lift to the higher altitudes or ride with the kids in an open mini-train with a guide.

You can even take your dog too. The zoo is a canine friendly environment which welcomes your four-legged best friend on a leash and in possession of proper vaccination documentation, and dog-watering stations with bowls and spigots are located throughout. 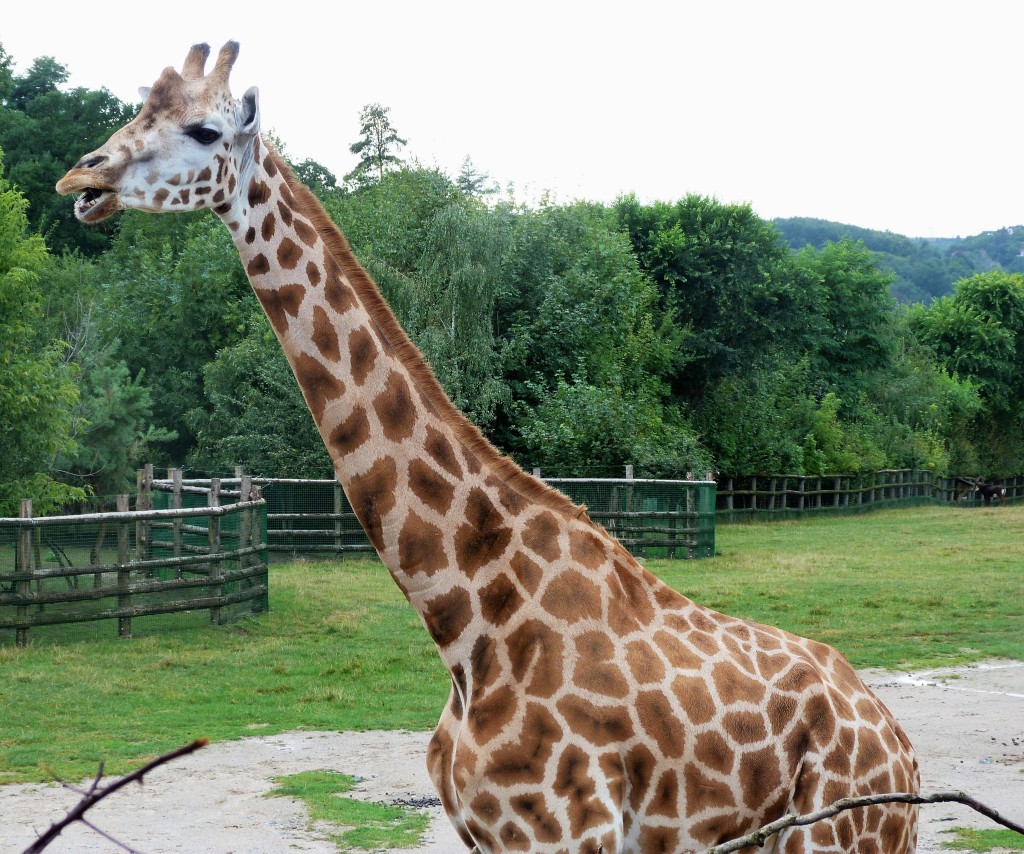 Life on the wild savannah.

Of course, all of this exercise is bound to make the visitor hungry like the wolf. So to this end, there are a number of different eating establishments with darned fine cuisine located throughout the zoological garden, and beers and other beverages as well as a variety of snacks are available at numerous kiosks. So there’s no need to pack a lunch (and supper) to take with you.

The Prague Zoo is easiest to find by taking the red Metro line C to station Nádraží Holešovice. From there take bus 112 to stop Zoologická Zahrada. Here’s wishing you a wild time! 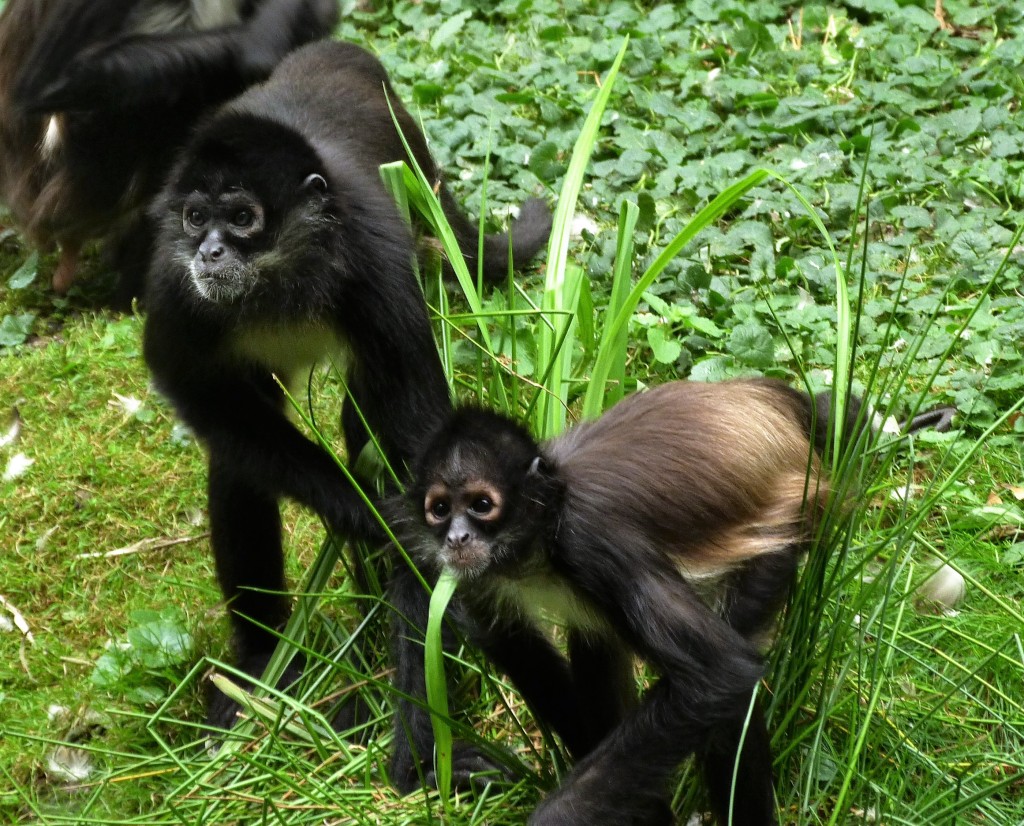 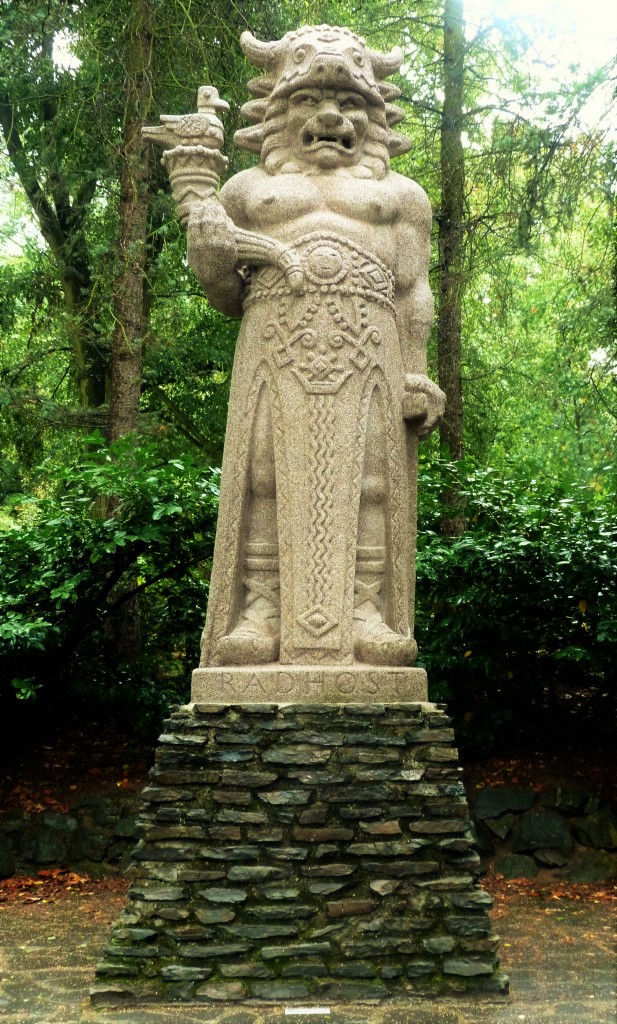 Radegast, the Slavic god of home, hearth, hospitality, and fine Moravian beer, one of many beautiful sculptures located throughout Zoo Praha. 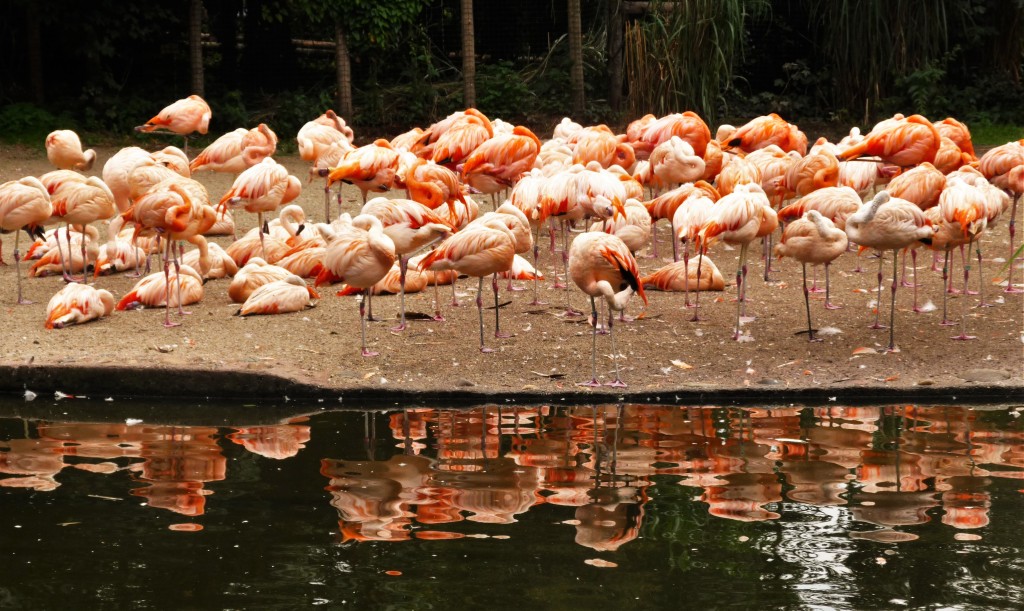 Pretty in pink. And orange.