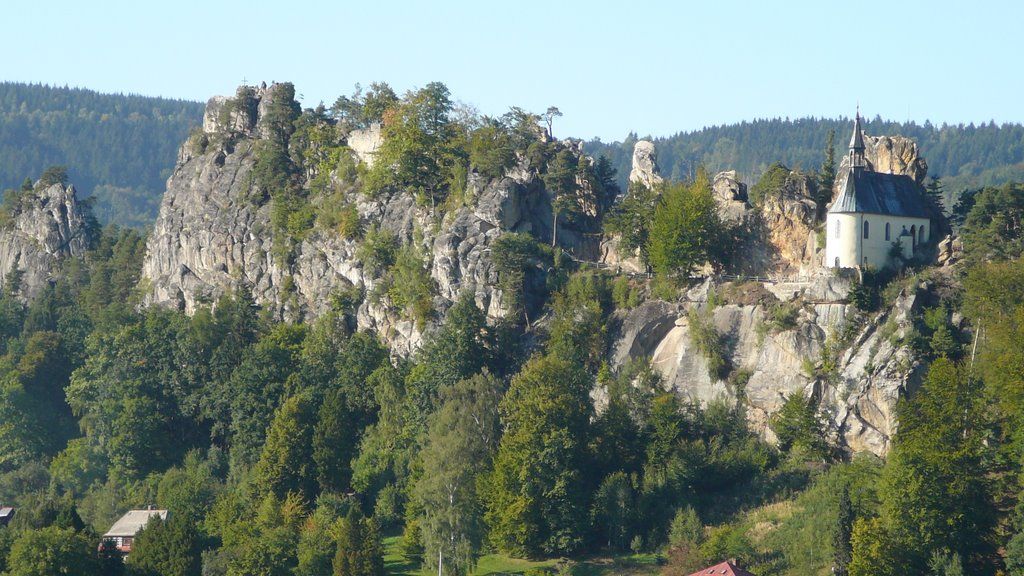 So now that you’re in the Czech Republic, are you planning to spend all your time hanging around the city? We all know Prague is beautiful, but there’s a lot more to see in this part of the country than just the capitol. If you never leave the Little Mother, then you’re going to miss out on some of the most beautiful countryside in central Europe. One of the most spectacular regions you can visit in Bohemia just a short train ride away from Prague is the area known as Český Ráj, or in English, Czech Paradise. It’s an idyllic landscape of Middle-Earthian proportions covering approximately 1400 sq. kilometers, and situated in the rough triangle of Czechian forest defined at each corner by the towns of Mladá Boleslav, Nová Parka, and Semily. There you’ll find low, tree-covered sandstone mountains broken up by gorges and valleys, rivers and streams surrounded by natural rock spires jutting straight up out of the greenery. And to complete the otherworldly feel of it all, you can’t help stumbling across the ruins of medieval castles and beautifully restored Renaissance villas as you make your way around. Pretty much everywhere worth being there is accessible to the traveler. The entire countryside is threaded together with an elaborate network of hiking and biking trails, and the rivers and lakes are a favorite spot for canoers and swimmers. 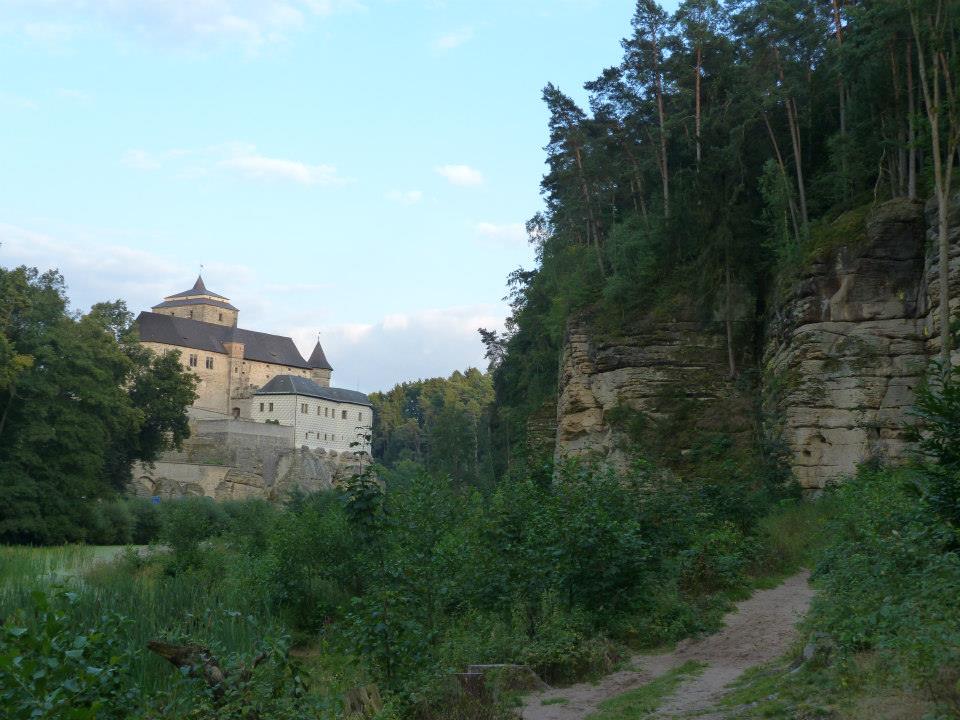 You’re right, Frodo, we should spend the night here.

One of my favorite lesser-known spots in the region is a tiny village called Malá Skala, located a few kilometers north of the small town of Turnov on the northwest edge of the verdent triangle. I first discovered this little valley community in the summer of 2006 when I went to a three-day live music festival there to soak up the sounds of some great Czech and Slovak bands while soaking myself in the cool waters of the river Jizera which runs along the bottom of the valley and which is straddled by Malá Skala. Since then, I’ve been returning regularly to camp and hike several times a year in all seasons, particularly during the summer months. In that time, my girlfriend and I have crisscrossed every trail up and down the valley on foot, and had a beer in practically every trail-side inn in the surrounding hills. So if you want to get out of the urban zone for a day or two, this is a place that I can recommend from a decade’s worth of good times.

For more indepth information about what to do in Malá Skala, click on any of the hyperlinked names in this article and you’ll be taken to the appropriate websites for each. Most of the linked sites are in English, but not all, so you may need to apply Google Translate once in a while if you didn’t take the time to learn to speak Czech perfectly before you arrived. 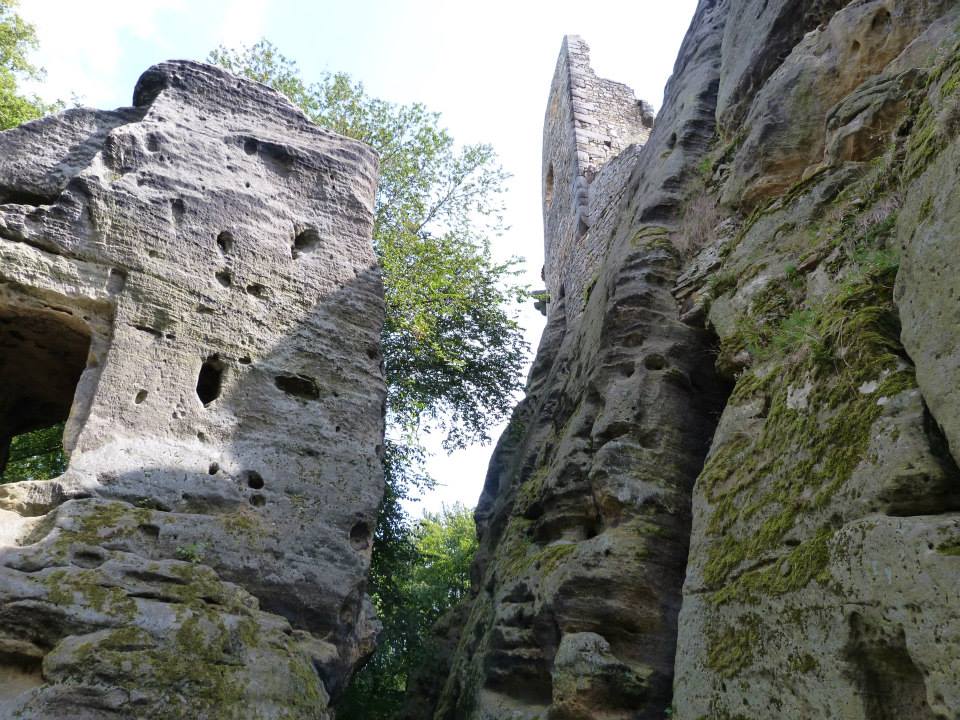 So first, how do you get there? Easy – one train from Prague’s main station, Hlavní Nádraží, directly to Malá Skala. This is the Prague-Tanvald line. It gets you to Malá Skala in two hours, and it leaves from Prague most days once every two hours starting at about 7:30 in the morning. Same is true in reverse, with the last Prague-bound train leaving the village about 6:30 in the evening. So Malá Skala is perfect for either a day trip or for an overnight excursion. You can do a good, long hike and still have time for dinner and beers at the village pub before you head back to the city. Or, if you decide to stay over, there are a number of very nice and very inexpensive pensions and hotels.

If you’re packing a tent, you can do what we normally do and camp out on an island in the middle of the river. Only a 10-minute walk from the train station is a picturesque campground called Autocamp Ostrov where you can either pitch a tent under the trees on the riverbank or rent a small cabin. The premises are very well-maintained with access to water, toilets, pay showers, and even a kitchen where you can make your morning coffee. This is the super cheap way to go if your budget’s tight. Tent sites, each with a fire pit, cost only 48 kč per night plus 48 kč per person. So for two people, we’re talking 144 kč a night, or a little over 5 Euro at the current exchange rate. A cabin which sleeps four goes for only 300 kč (11 Euro) per night plus the per person fee, though the cabins are frequently booked in the summer. But there’s always a good chance of getting one in the fall or spring. For reservations, you can email them a couple of days in advance at autokemp.ostrov@seznam.cz, but we’ve never had a problem getting a tent site with or without a reservation even during the high season. 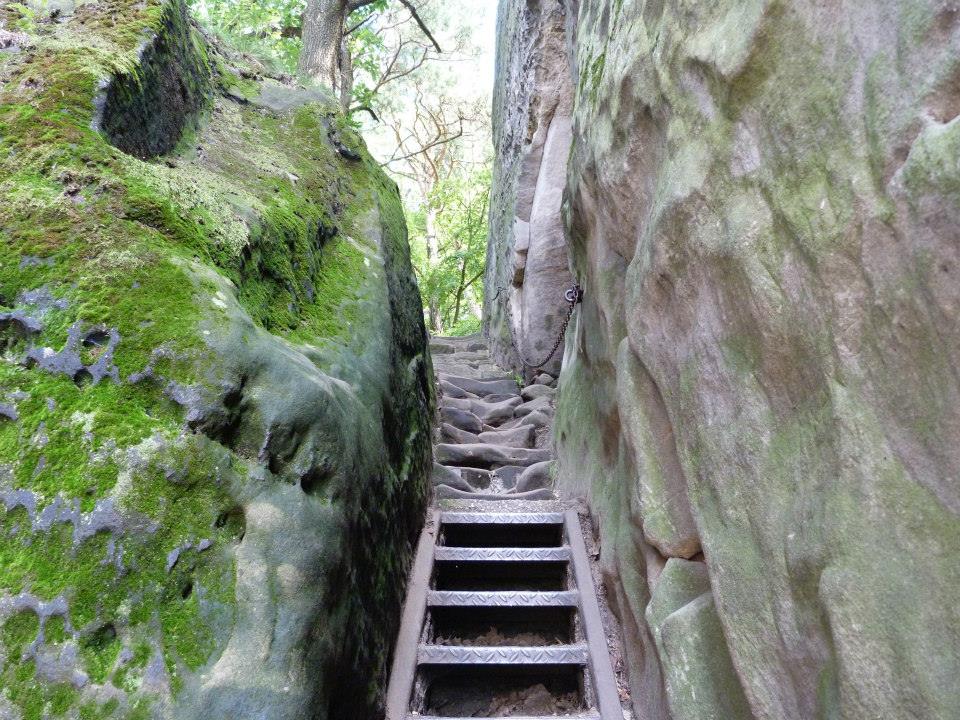 If it’s paradise, then there must be a stairway to heaven.

For those who prefer to sleep in a bed with breakfast provided, there are plenty of pensions and hotels also within a short walk of the train station. The largest, which is literally right there when you get off the train, is the Hotel Skala. Or just a few steps farther along through the village is the highly recommended Pension NECO. Either of those will run you 30-40 Euro per night for two people, depending on the rooms you select, or alternatively a quick Google search will turn up a bunch of other options in the neighborhood.

Once you’re there, hiking the trails is a must, in my opinion. The rock formations on either side of the valley are incredible. On the east you have the 562m-tall Sokol, a small forested mountain with several overlooks offering great views of the surrounding country. A 45-minute hike up from the village will bring you to a summit perimeter trail, and a walk around that will show you some of the beautiful sandstone topography for which Český Ráj is famous. Down the back side of Sokol you can gain access to the well-known Zlatá Stezka, or Golden Path, a 118km-long trail which leads all the way from one end of Český Ráj to the other. The west side of the valley above Malá Skala is dominated by the knife-edged ridge where castle Vranov was built by the Valdštejn family in 1425, and which is now the site of the Pantheon, built on the ruins of the old castle by František Zachariáš Römisch during the 19th century, and originally intended as a series of remote, interconnected exhibition chambers dedicated to the cultural and artistic achievements of the Czech lands. At the end of the ridge beyond Vranov-Pantheon lay the ruins of castle Frýdštejn, built sometime during the 13th Century, besieged by the Hussites in 1432, and which continued functioning as a watchtower up to the end of the 16th century.

In addition to hiking, bikers and canoers will also find a good venue for their activities up and down the valley’s roadways and trails and on the rapidly flowing waters of the river Jizera. A good place to know about for this is Žlutá Plovárna, located on the riverbank on the edge of the village, where you can swim and relax with a meal and a beer, or you can rent a canoe, kayak, inline skates, or a scooter for the day’s entertainment. For kayakers and canoers, they can pick you up and bring you back from anywhere between Malá Skala and Mladá Boleslav, some 50km distant. Or, if you still have the energy after your downriver trip, you can return by scooter. 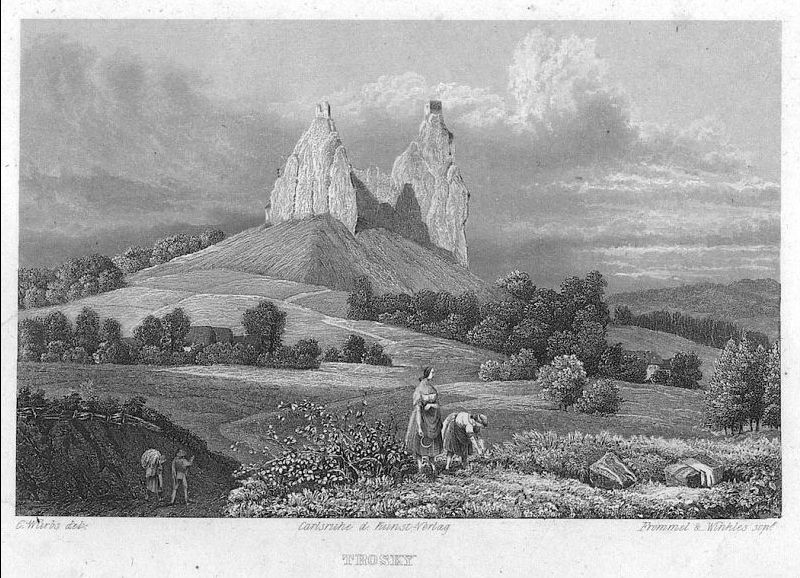 You can see this in the distance from everywhere. Though we fondly refer to it as Mordor, it’s actually the ruins of Trosky Castle. 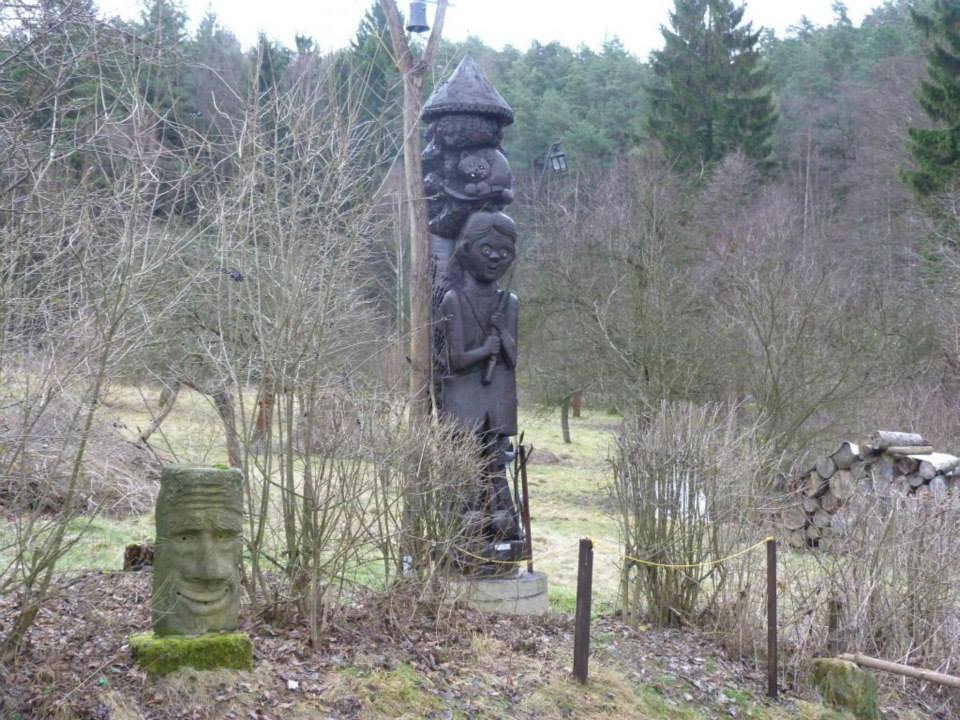 Some fellow travelers we met in the hills around Malá Skala.