I find street art fascinating so, luckily, I live in a city where there’s a lot of of it. This article isn’t going to attempt to go into the now-old debate about the difference between street art and graffiti, nor the relative merits of each, nor how the perpetrators of one style consider the proponents of another to be sell-outs. What it will do is to tell you the locations of some places in Prague where you can go to find for yourselves a bunch of interesting artwork. (Prague has a large number of legal graffiti zones, a list of some of which appears below with linked maps.) And we’ll show you some photos of some of the stuff we’ve noticed both recently and over the years that we found to be pretty cool. Admittedly, some of these photographs are of illegal acts of vandalism, but it can also be argued that they make their derelict locations look better than they would without them. And some of these photos are of sanctioned works executed with the permission of the city authorities who recognize the truth in the anonymous old adage, “Kde není umění, tam se nic nezmění. (Where there isn’t art, there nothing changes.)” 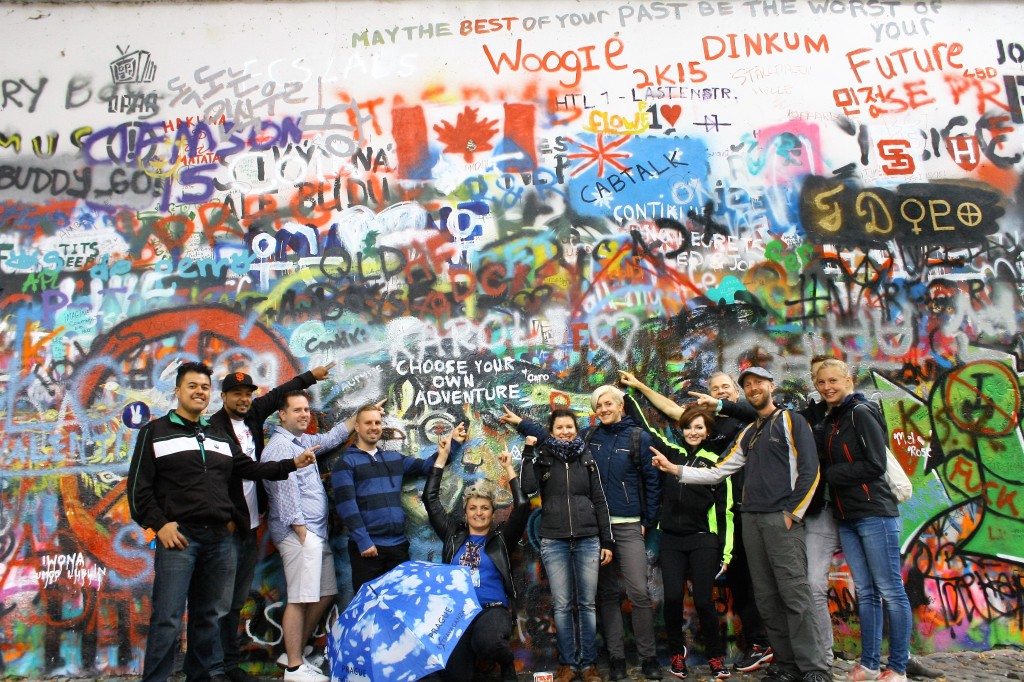 Join us for the Charles Bridge & Prague Castle Free Tour and leave your mark on the famous John Lennon’s Wall in Prague.

One of the most well-known living works of street art in Prague is the John Lennon Wall near Kampa park on the west side of the river. These days it’s a legal zone of public self-expression, but back in Communist times, it was anything but. If you want to know more about this vehicle of protest in days gone by, you can learn all about it by going on the Prague Extravaganza Charles Bridge & Castle Free Tour, where one of our guides will show you where it is and tell you what it’s all about. And one interesting fact to know before you do that, is that back in 2014, to commemorate the 25th anniversary of Czechoslovakia’s Velvet Revolution, the Lennon Wall was painted completely white one night by an anonymous group of art students who called themselves Prague Services. As you can see for yourself today, it didn’t stay that way for long. 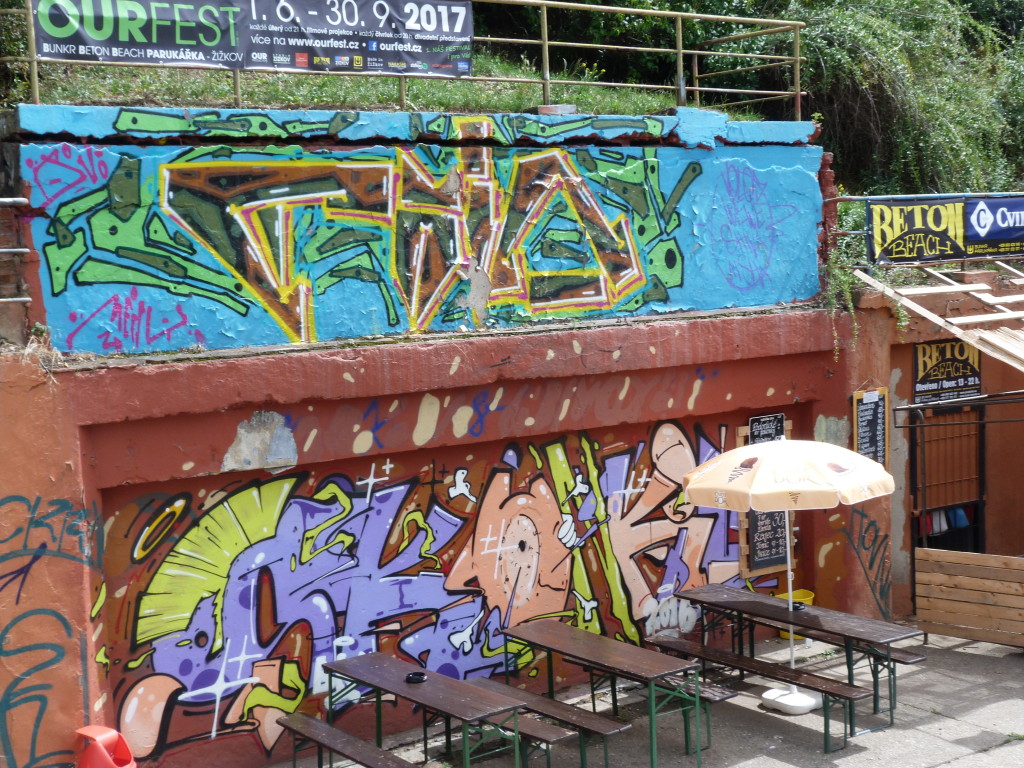 The Concrete Beach, which guards the entrance to a Communist-era nuclear bunker, is one of two beer gardens at Parukářka Park in Žižkov.

As promised above, scroll down here for a list of 12 graffiti zones that you can find your way to if you’re feeling particularly adventurous. Some of them are relatively close to the city center, some of them are legal and some of them are questionable, and some of them are in the city’s more outlying districts. There’s no need to feel too trepidatious about wandering around in strange neighborhoods here, as Prague doesn’t have much in the way of dangerous districts. Just use your common sense and good judgement, and all will be well. (And please don’t wander around on tram and train tracks for a better view or to take photos! Duh!) Click on the links below for appropriate maps, and you might find the IDOS website helpful for navigating the public transportation system to get you there. (If the IDOS site doesn’t come up in English, look for the tiny English language icon in the bottom right corner of the big blue box.)

A legal graffiti wall in Žižkov as it appears today.

5.  Palmovka (Okay, so I just now read that this one is not officially legal, but it’s a site where people usually get away with it without being hassled. Don’t paint here yourselves because you’ll be breaking the law.)

The same wall in the photo above, the way it looked about four years ago.

7. Těšnov (I read that doing art here is only allowed on the weekends, as during the weekdays it also serves as a parking lot.) 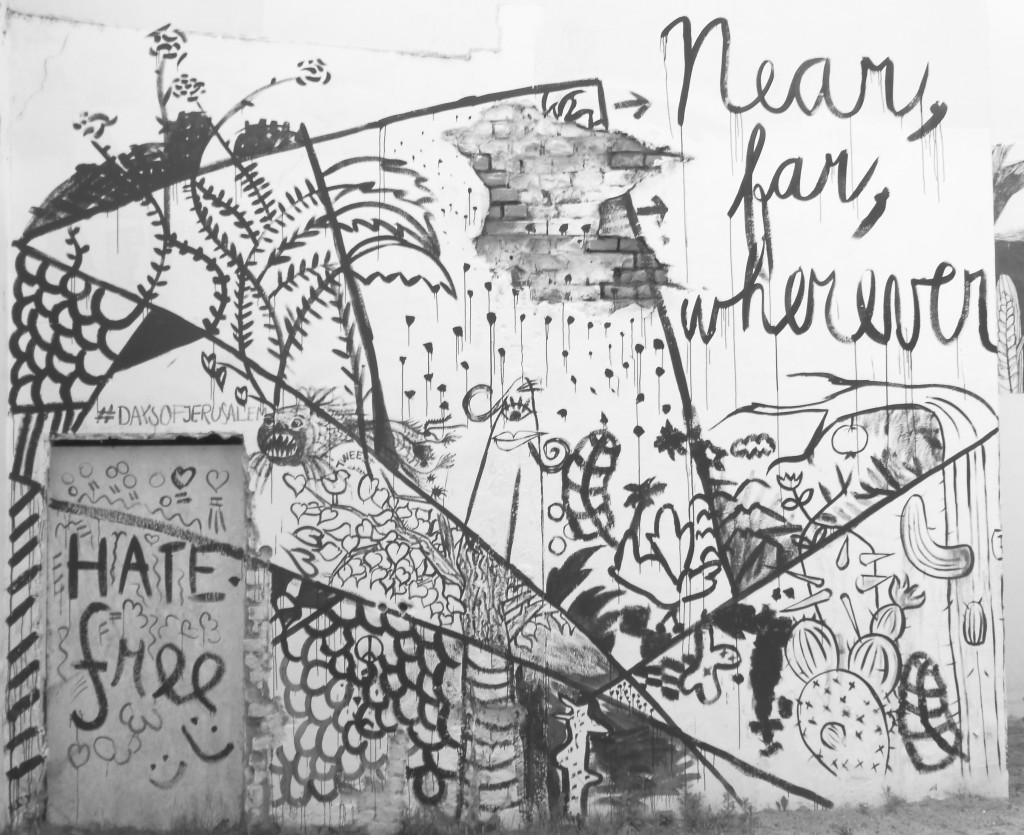 A nice black-and-white piece at a small beer garden called Tiskárna na Vzduchu at Stromovka Park. This photo was taken about 3 weeks ago. By last weekend it had already been painted over by something equally interesting.

11. Praha 11, mutiple sites. The link is in Czech, but scroll down the webpage for maps. 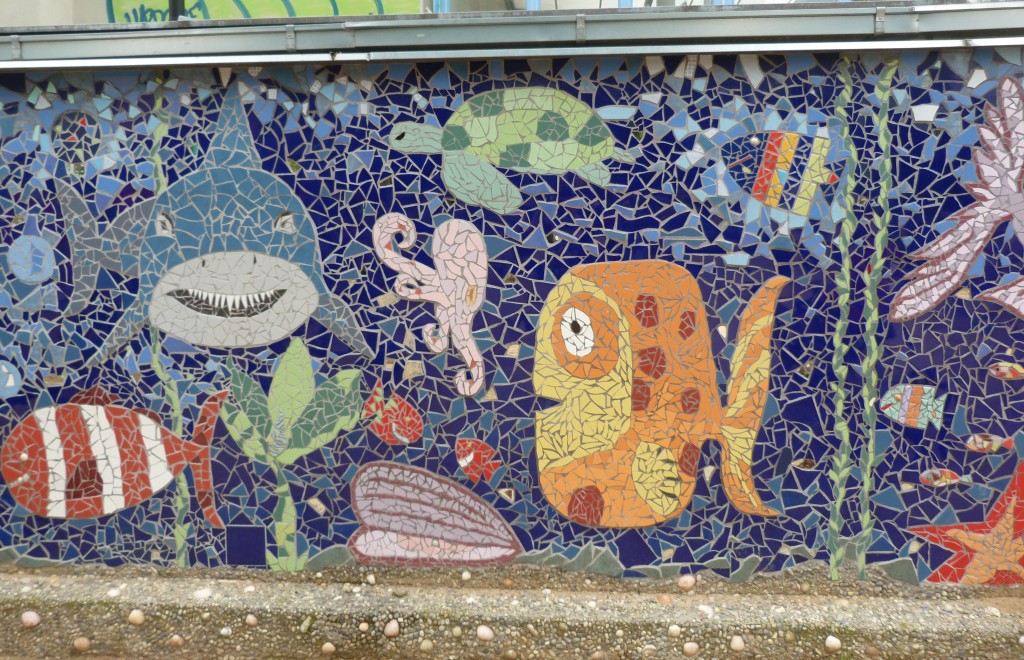 This mosaic piece at the park Heroldovy Sady was done by the group Free Mozaik with permission from the town council of Prague 10. Click the link to see a lot more of their impressive work. 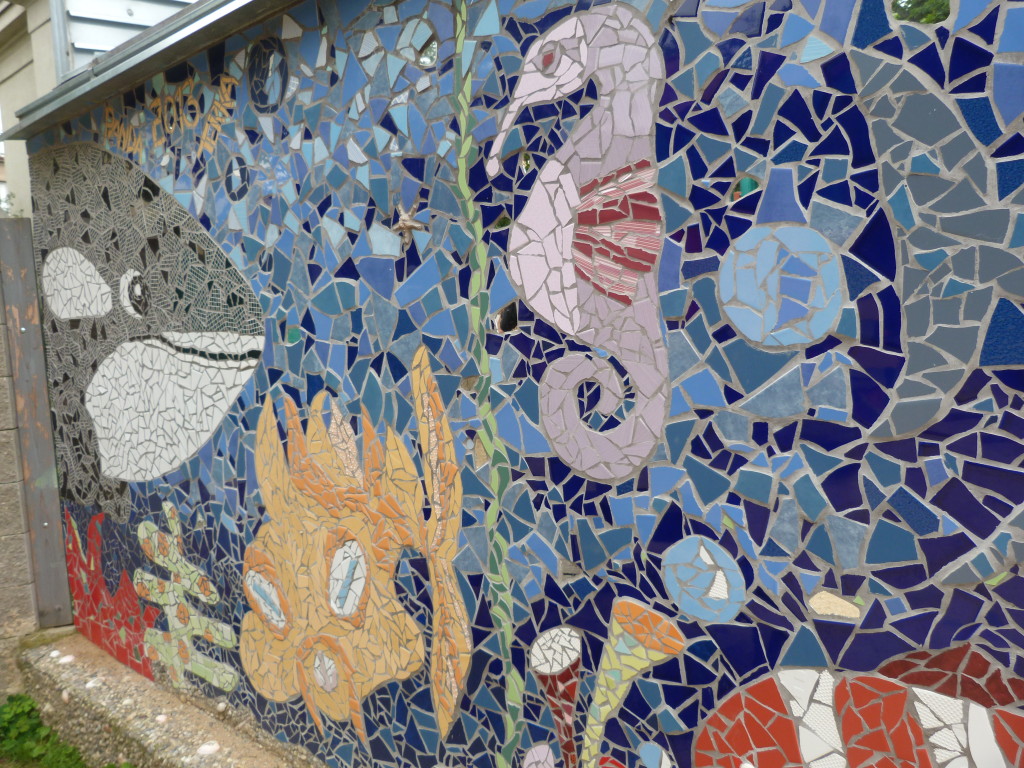 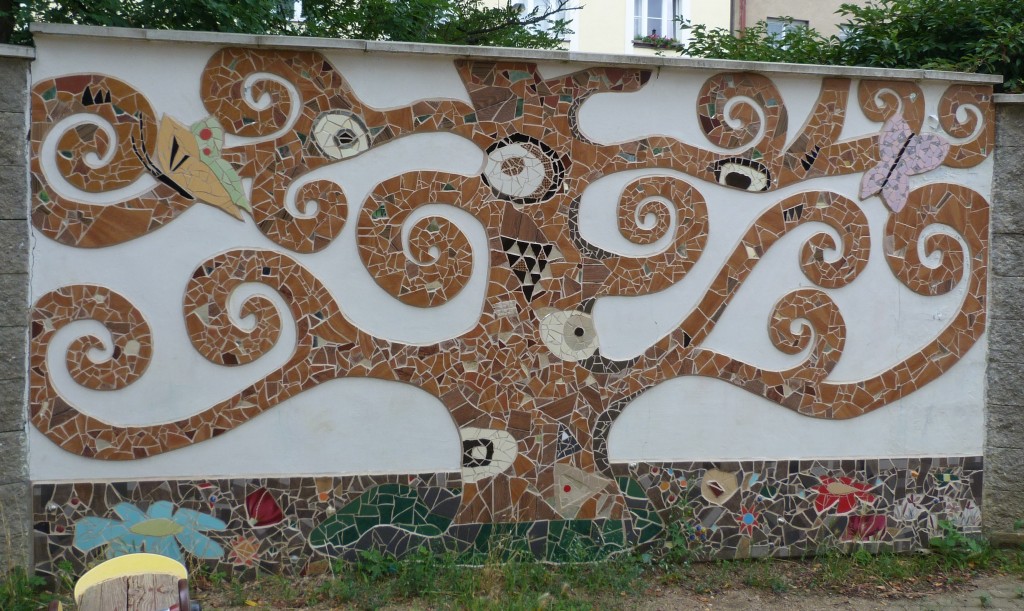 Another piece by Free Mosaik in the same park. 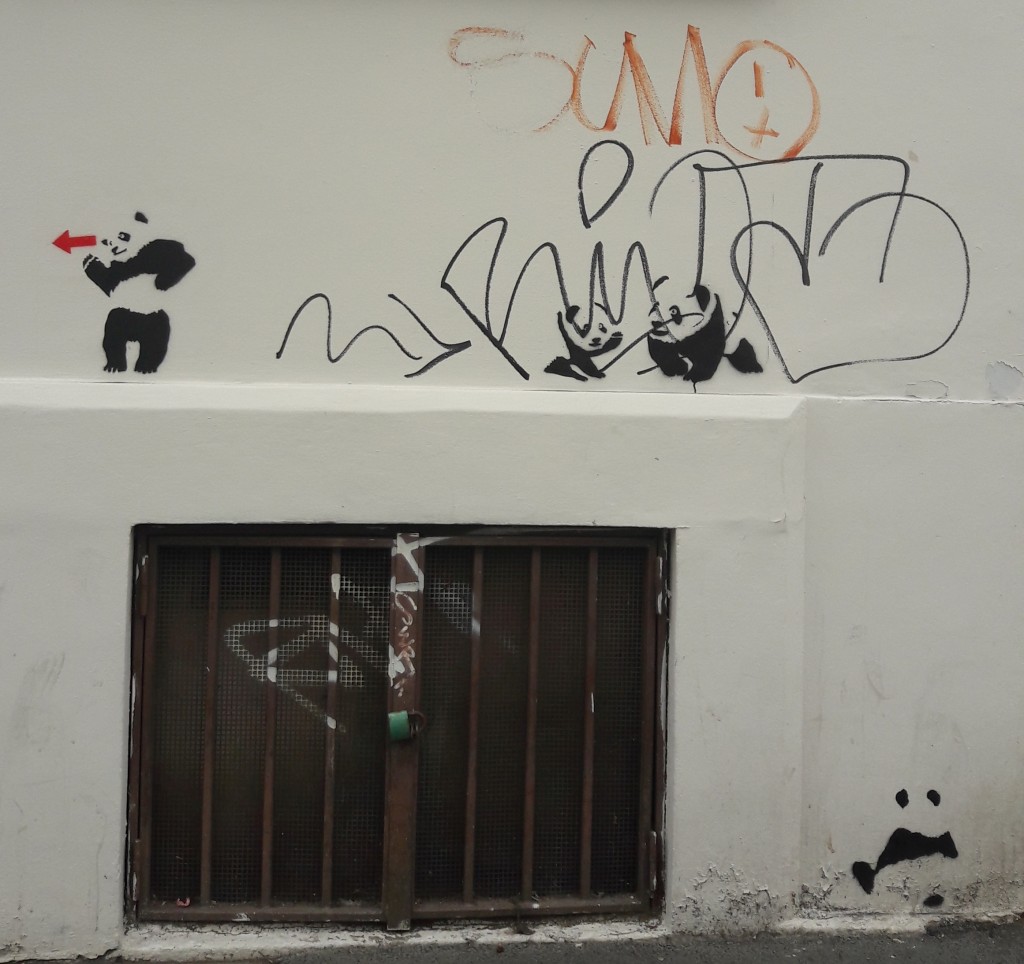 Not too long ago, these pandas appeared all over Žižkov, pointing the way to somewhere with a trail of red arrows. 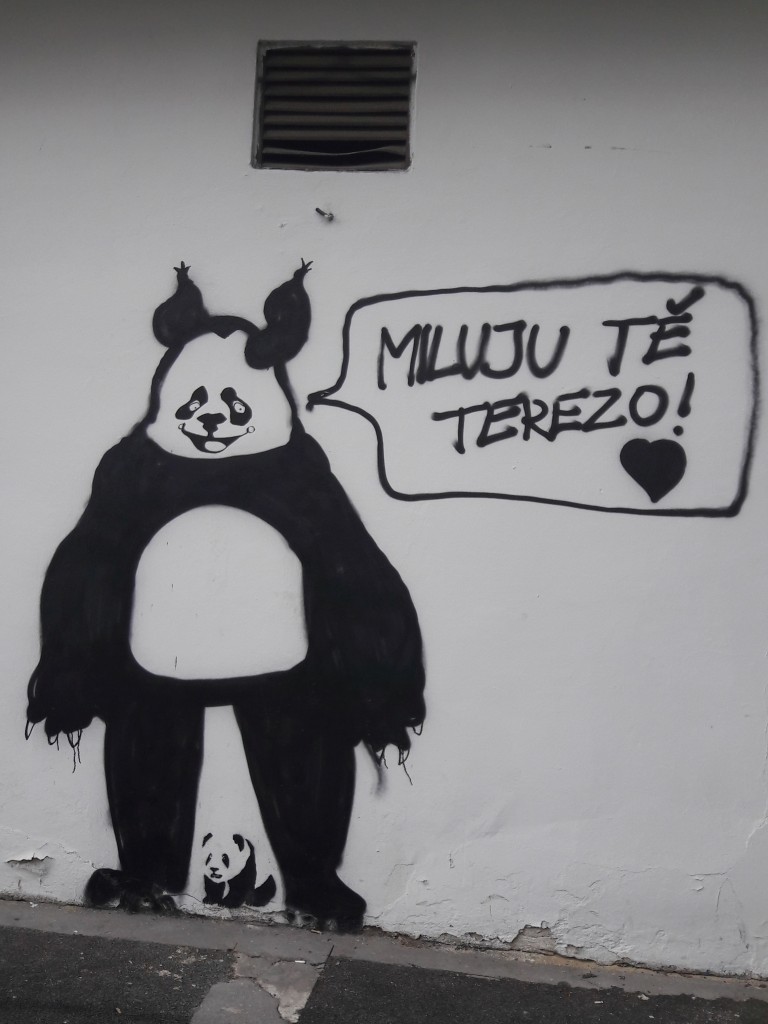 If you follow the trail, not only will you get a good tour of the upper side of Prague 3, but you will eventually stumble upon this. “I love you, Tereza,” says the bear.

This was photographed in a derelict zone of Nusle about 11 years ago. 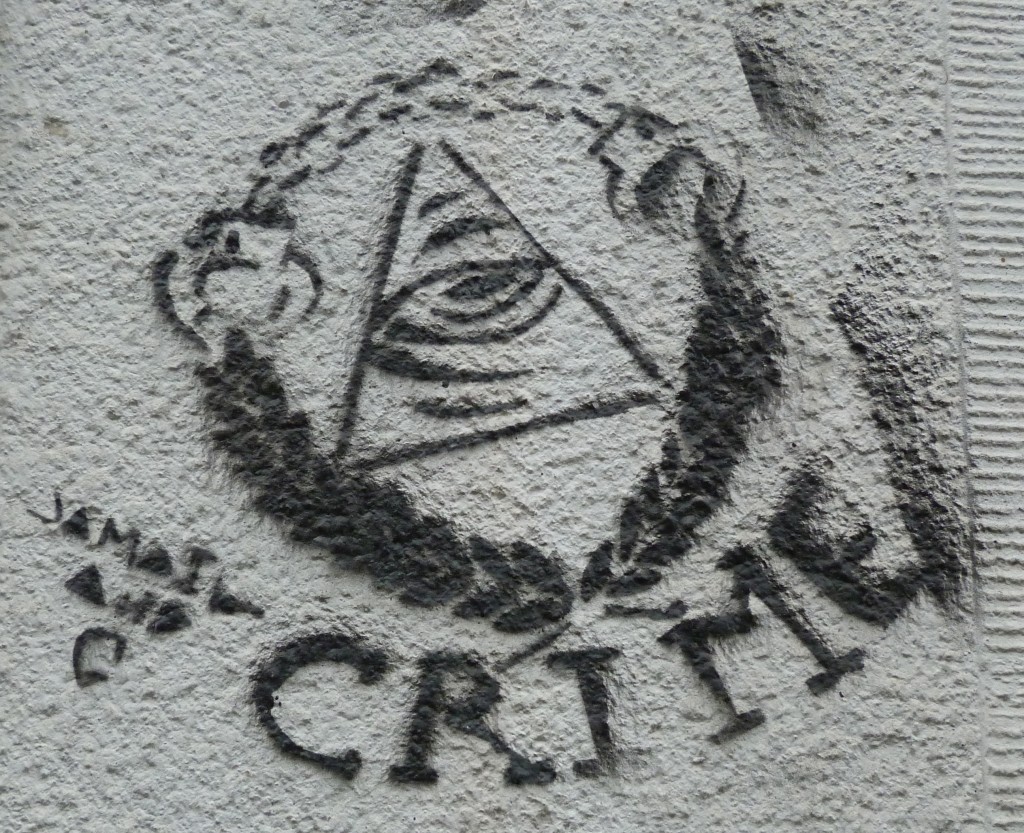 But remember, kids, making pictures on other people’s property without permission is called “vandalism”, and it’s illegal. Prague Extravaganza does not encourage or advocate or endorse in any way the creation of illegal graffiti. 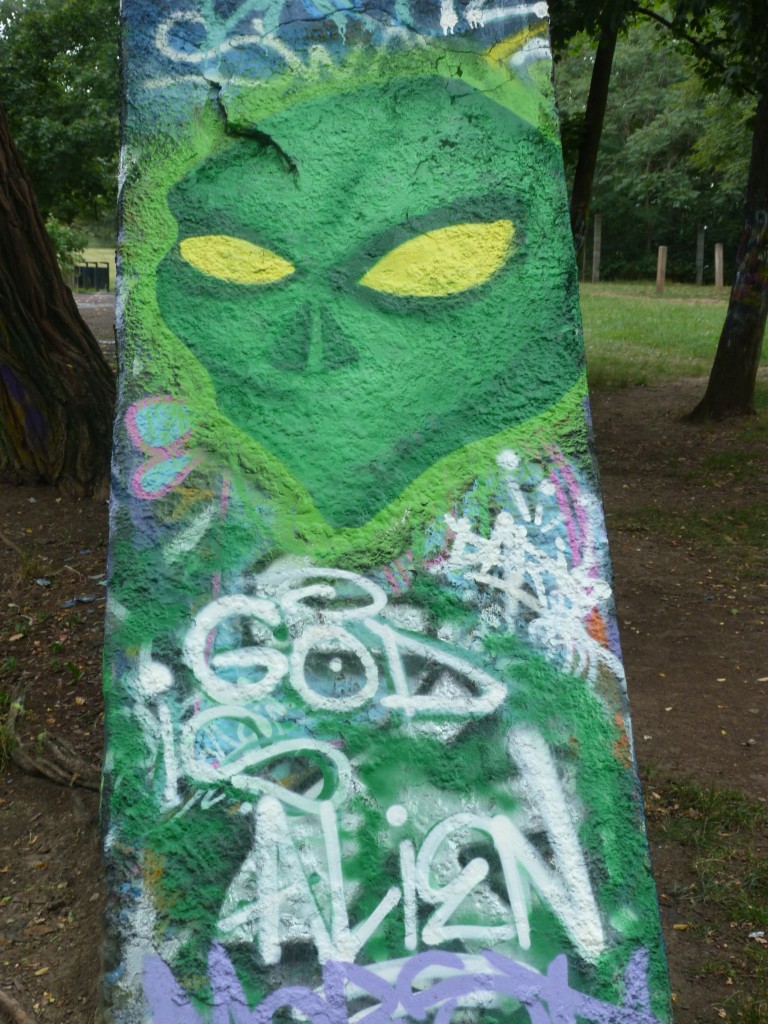