Wenceslas I, Duke of Bohemia, was a medieval ruler who is now widely known as the patron saint of the Czech lands. Many aspects of his life and rule had the feel of a Shakespearean tragedy, from the rivalry between his pagan mother and sainted grandmother, to his premature and untimely demise. In the end, he was murdered by his own brother’s henchmen on 28 September, 935 CE, which day is now celebrated as the feast of Saint Wenceslas. 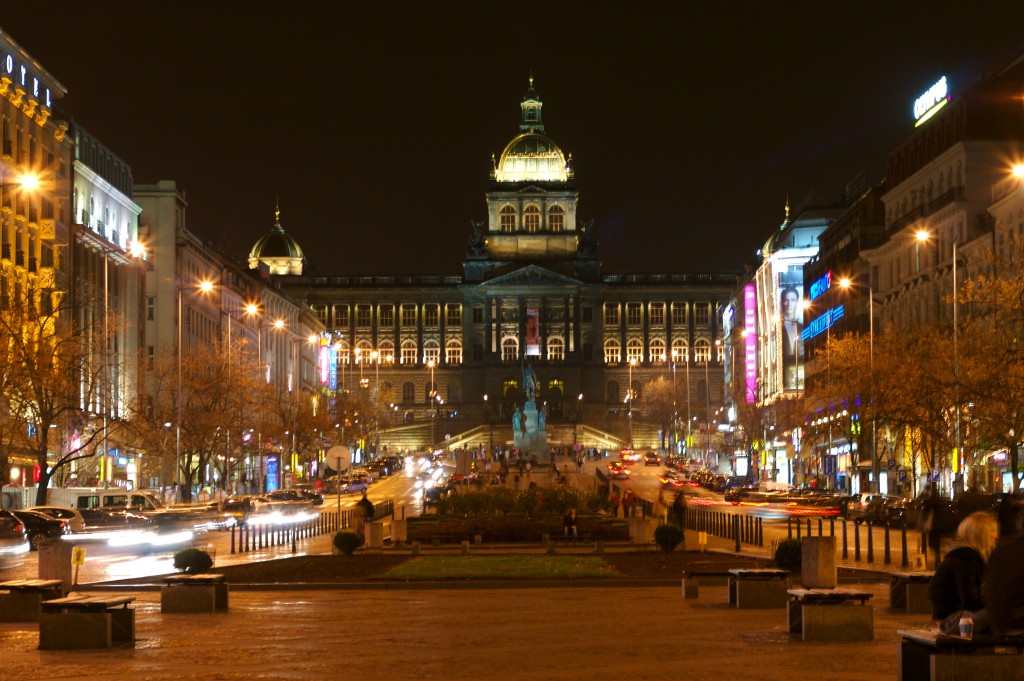 Wenceslas Square in Prague, once the horse market in the time of King Charles IV, is named after the country’s patron saint, a statue of whom stands at the top of the square in front the National Museum.

Wencelas’ grandfather, Bořivoj I of the ancient Přemyslid dynasty, was the first Christian ruler of Bohemia, having been baptized along with his wife Ludmila by the legendary Saint Methodius sometime around the year 880. At that time, Bohemia was a vassal state of Great Moravia under the rule of Svatopluk I who had sent Methodius to Bohemia on an evangelical mission. Ludmila, the daughter of Prince Slavibor of Mělník, had married Bořivoj sometime in the early 870s. Initially, their efforts to Christianize Bohemia led to their being driven from the land for a time, but eventually they returned to continue their efforts, which eventually resulted in Ludmila being canonized as a saint recognized by both the Roman Catholic and Orthodox churches.

Bořivoj and Ludmila had two sons, the younger of whom, Vratislav I, eventually inherited the dukedom after the death of his older brother in 915. Vratislav married the pagan princess Drahomíra of the Hevelli, a tribe of Polabian Slavs living in the eastern regions of the German lands. Though Drahomíra was baptized, legend has it that this was a strictly political move and that she retained her pagan practices in private. Probably in the year 907, Vratislav and Drahomíra had a son named Vaclav, better known today by the Latinized version of his name, Wenceslas. 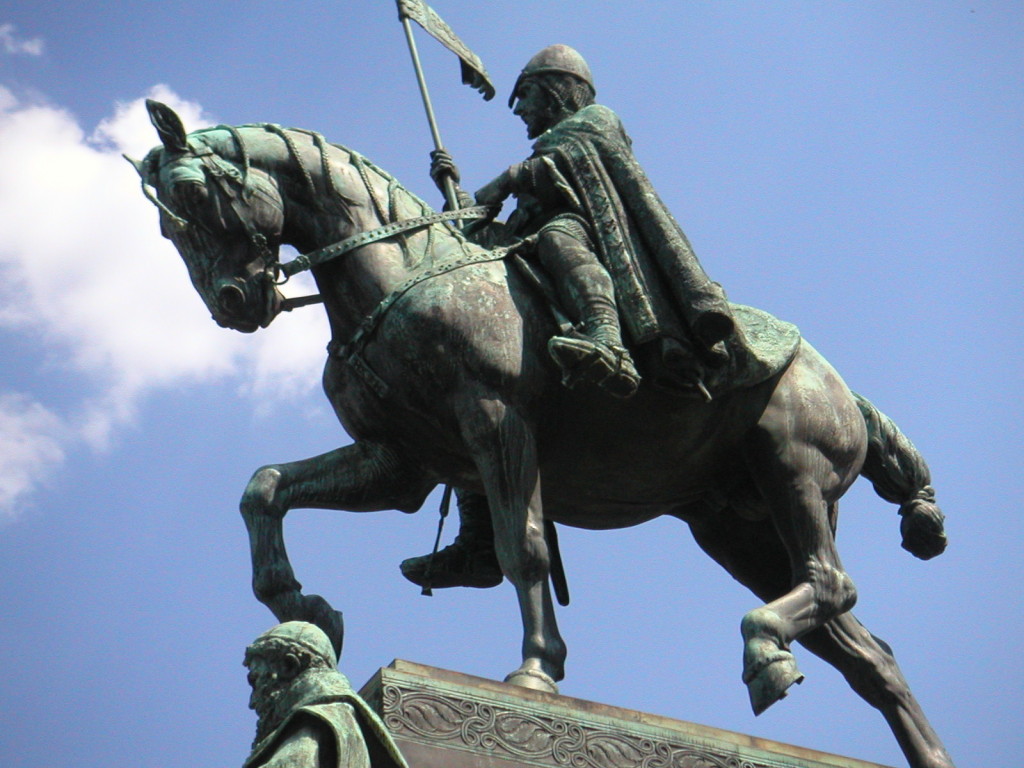 The statue at the top of Wenceslas Square, created by sculptor Josef Vaclav Myslbek.

Wenceslas was born into a turbulent era at a time when the empire of Great Moravia was crumbling, under pressure from both the German princes of the west and the Hungarian Magyars of the east. His father Vratislav struggled to establish an independent Bohemia, distancing himself politically from Moravia while at the same time establishing closer ties with the Germans who were, however, also aggravated by his marriage to Drahomíra and his consequent support of the Polabian Slavs with whom the Germans were at odds. His brief years as duke were spent primarily engaged in a delicate game of conciliating the larger powers surrounding him in order to maintain his own fledgling state.  When Vratislav was eventually killed in battle with the Hungarians around 920, the underage Wenceslas was proclaimed as the new Duke of Bohemia with his mother acting as regent during his minority.

But Drahomíra’s power remained incomplete due to the great influence that Ludmila had over her son and the active part that the boy’s grandmother still took in the government of the region. The two women were in constant conflict as Ludmila took over the education and training of her grandson whom she wished to become a good God-fearing ruler who would continue the process of Christianizing the Czech Slavs which she had begun with her husband just a few brief decades earlier. According to the 12th-century chronicler Cosmas of Prague, Drahomíra felt that Ludmila was giving the young Wenceslas an education fit for a priest or a monk, but not properly equipping him to become a reigning prince. While she struggled to minimize the influence of Ludmila upon her elder son, she also put her efforts into keeping close Wenceslas’ brother Boleslav and molding him into a nobleman more in her own image. Eventually, the friction between the two women lead to Drahomíra dispatching two of her minions to Ludmila’s castle at Tetín where they assassinated her, reportedly strangling her with her own veil in September of 921.

When Wenceslas came of age in 924 and was proclaimed duke, he had his mother exiled for a time, but eventually called her back to Prague. Now that Great Moravia had fallen and was no longer part of the political picture, Wencelas had to contend with both pressure from the German princes, chief among them Frankish King Henry the Fowler, and with continual raiding by the Hungarian Magyars. At last forced to align himself with King Henry, Wenceslas brought many German priests to Bohemia and gave precedence to the Latin rite over the Old Slavonic one which had been instituted in the days of his grandfather by St. Methodius. From King Henry, Wencelas obtained the holy relics of St. Vitus and then founded the first church dedicated to that saint at Prague Castle, the predecessor of the St. Vitus Cathedral which still stands within the castle walls today.

None of this sat well with Drahomíra or her other son, Boleslav, who was in control of large regions of the dukedom as the result of agreements made supposedly to keep he and his brother from quarreling. In the end, plotting under the influence of his mother, Boleslav invited the duke to the Feast of Saints Cosmas and Damian in Stará Boleslav. After the feast, as he was returning home, Wenceslas was waylaid and murdered by three of Boleslav’s henchmen, after which Boleslav had himself declared reigning Duke of Bohemia. 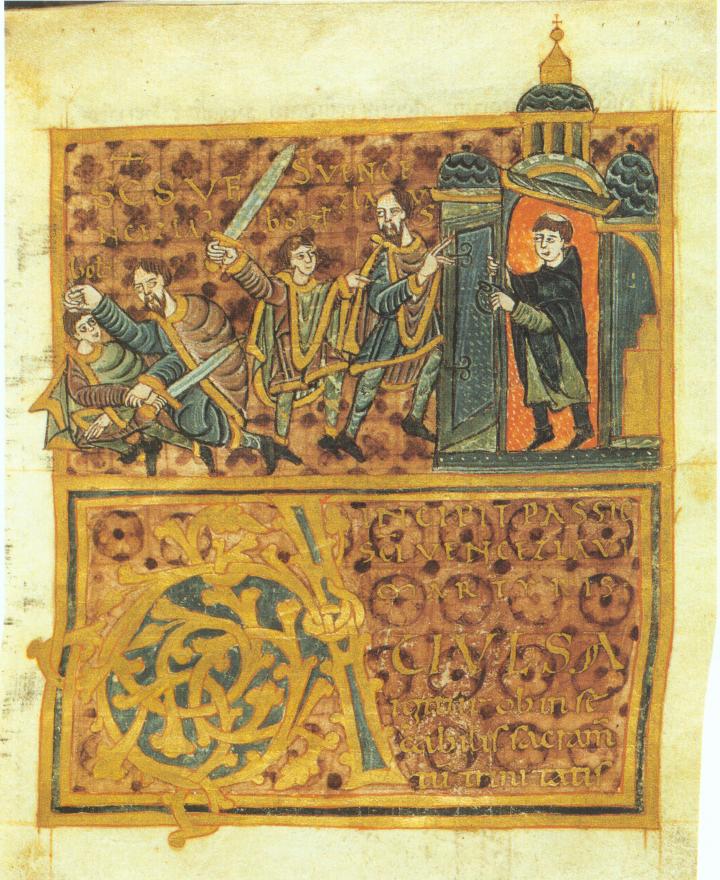 The murder of Saint Wenceslas as depicted by an artist in the 10th century.