Today, the Czechs are remembering one of their several painful moments in the history of our country. It has been exactly 50 years since the USSR-led forces have invaded Czechoslovakia. The reason for the invasion was due to the Prague Spring. This was a period in which the Czechoslovak communist government tried to relax some of the tyrannical features of the regime such as complete censorship of the press.

This was unacceptable for the Soviets which saw the developments as a threat to their control over our country. Thus, they and the neighbouring states of the Warsaw pact decided to come to ‘help’ the Czechoslovaks against a possible ‘counter-revolution’.

The following unique video from the BBC shows how did the situation look like just days after the invasion and how the Czechoslovaks tried to deal with the whole situation. 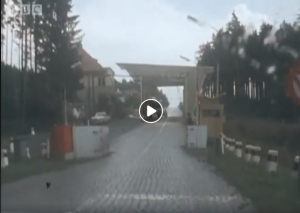 Post-Invasion Footage, click on the picture to see the video.

Unfortunately, any resistance was futile and the country had to come to terms with the fact the Soviets are going to stay in the country for another 21 years. Some 300,000 decided to leave the country, the rest retreated from the opposition and allowed the communists to establish a period of ‘normalisation’ where the old tyrannical features were upheld whatever the price.72 people were killed during the invasion.

For a more complete historical note about the period, feel free to read our blog post from two years ago. We also wrote a follow-up about the aforementioned normalisation.

I would also remind readers that our company is offering an in-depth communism tour. Through the tour you can learn much more about the whole communist era and see places intimately tied with many of the historical events, 1968 included. You will even visit a nuclear shelter from the 1950’s!

And if you are in Prague around this time, you can certainly see many exhibitions tied to the event as well. For example, one of the main buildings of the National Gallery, the Veletržní Palác (Trade Fair Palace), has several exhibitions on display. The Old Town Hall also hosts an exhibition of a number of photographs from the event. 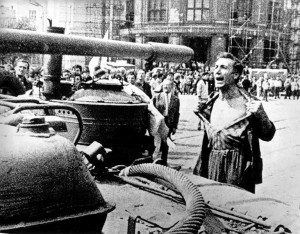 Resistance to the invasion.

There are also ways to learn about the event from the comfort of your home. There are numerous books and films connected to the event. Perhaps one of the most notorious texts is the ‘Unbearable Lightness of Being’ by Milan Kundera. From the movie sphere, there are several new pieces such as the HBO produced Burning Bush but I would also recommend watching a Czech classic, Pelíšky (Cosy Dens). The latter is an interesting mix of Czech humour and the bleak reality of the historical event.

Finally, I would point out, that while it might have been 50 years ago since the invasion, the ghosts of our past are still visible in the society.

The communist party is now supporting the ruling government for the first time since the revolution.  Our prime minister was a member of the Czech KGB (Státní Bezpečnost) and it is certainly worth mentioning that our current president Miloš Zeman decided not to present any commemorative speech connected to 1968 despite the important anniversary. The Czech national television will likely air the message of Slovak president instead.

All the more reasons to learn about our complex history!