So you just got off the plane or arrived at the train station, you’re dragging your luggage around and wondering where in the name of St. Wencelas your hostel or hotel could possibly be. You’ve got a map. That’s a good start. But the city is strange and you’ve never been here before. Of course, you don’t want to spend precious money on a cab (or take the chance of getting ripped off by a less-than-honest hackney, which happens far more often than it should), so you do what any budget-conscious, independent-minded traveler would do: you head for the tram stop or the metro station. But then after lugging your too-heavy backpack out to the curb or down a flight of stairs, you find yourself presented with an arcane chart written in a language you don’t understand with all kinds of funny accents and bizarre hooks over the letters, which is somehow supposed to be a transportation schedule. Not only that, you don’t even know where to buy a ticket. So what do you do? Simple – you just read this article before you set out on your journey and it should hopefully make your adventures in public transportation somewhat easier and more manageable. 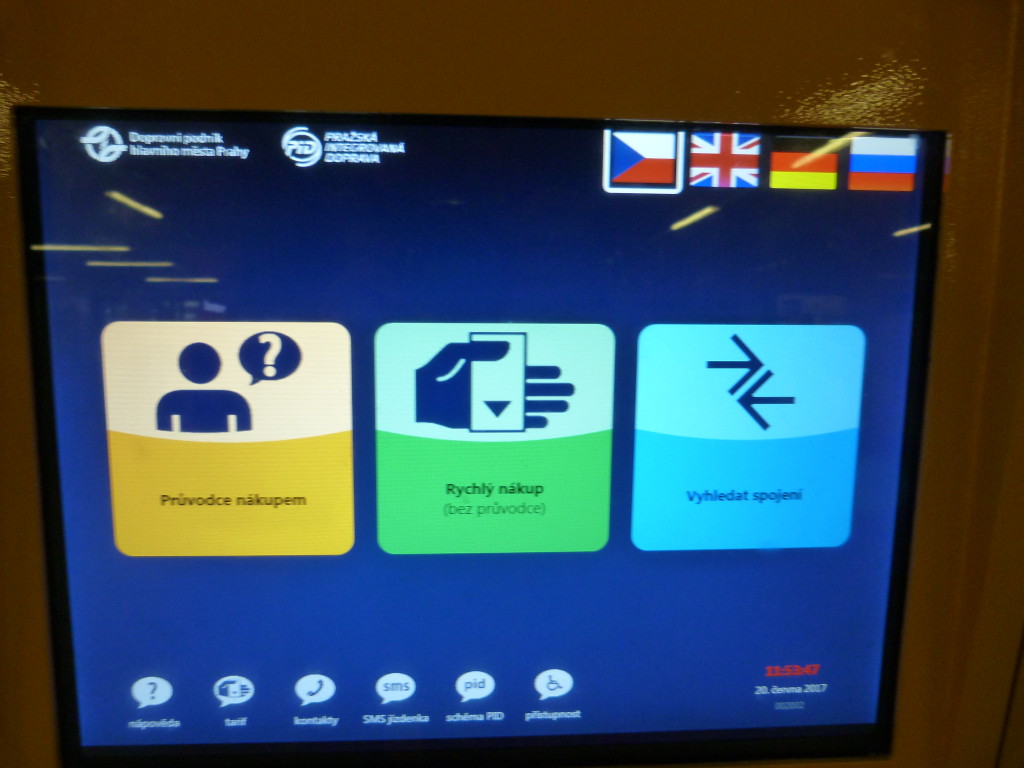 First, you need a ticket. If you’re lucky (but you probably won’t be) you’ll find one of these super-shiny new digital vending machines. Simply press the button that corresponds to the language you know how to speak, and follow the instructions on the screen. 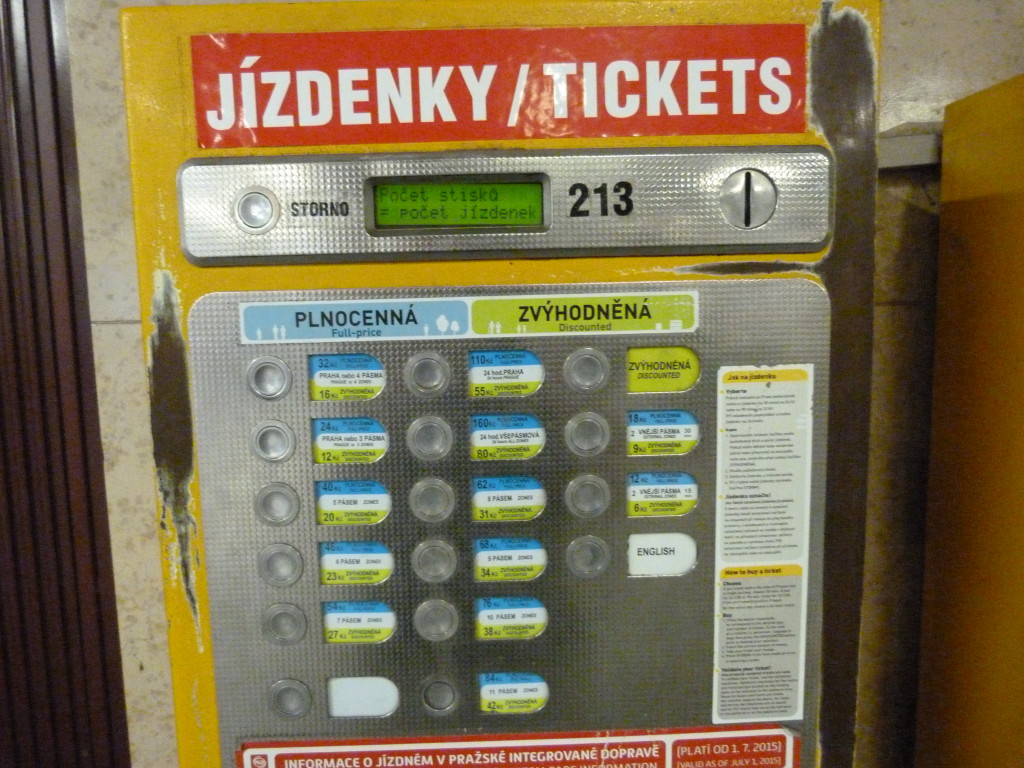 More likely, you’ll be confronted with one of these dinosaurs, but it’s not as complicated as the dashboard of a space shuttle, so never fear. And you can ignore most of the buttons because 99.9% of the time, you will only need to use two or three of them. You will either need a 24 kč ticket or a 32 kč ticket. The 24 kč ticket is good for 30 minutes. A 32 kč ticket is good for 90 minutes. Both can be used for unlimited transfers within the specified time frames. They can be selected using the top two buttons in the left-hand row. (You can also get a 24-hour ticket for 110 kč which is selected by the top button in the middle row.) Step 1: Push the button to select your ticket. Yes, you have to push the button first. Step 2: Insert your coins. No, it doesn’t accept banknotes. (Only the shiny new vending machines like the one in the above photo do that.) But yes, it does make change if you don’t have the exact amount. Step 3: Wait a few seconds while the machine buzzes and clicks, and then it will spew out your freshly printed ticket along with your change into the compartment at the bottom. Now you’re ready to go for a ride. If for some reason the machine keeps dropping your coins back to you without giving you a ticket, then take the offending coins and rub them up and down really hard on the side of the machine before reinserting them into the coin slot, just like everyone else does. (That’s why there are those big scratchy marks on either side of the silver button plate.) If you make a mistake while selecting your ticket, you can cancel the transaction by pressing the button at the top that says STORNO, and then start over. 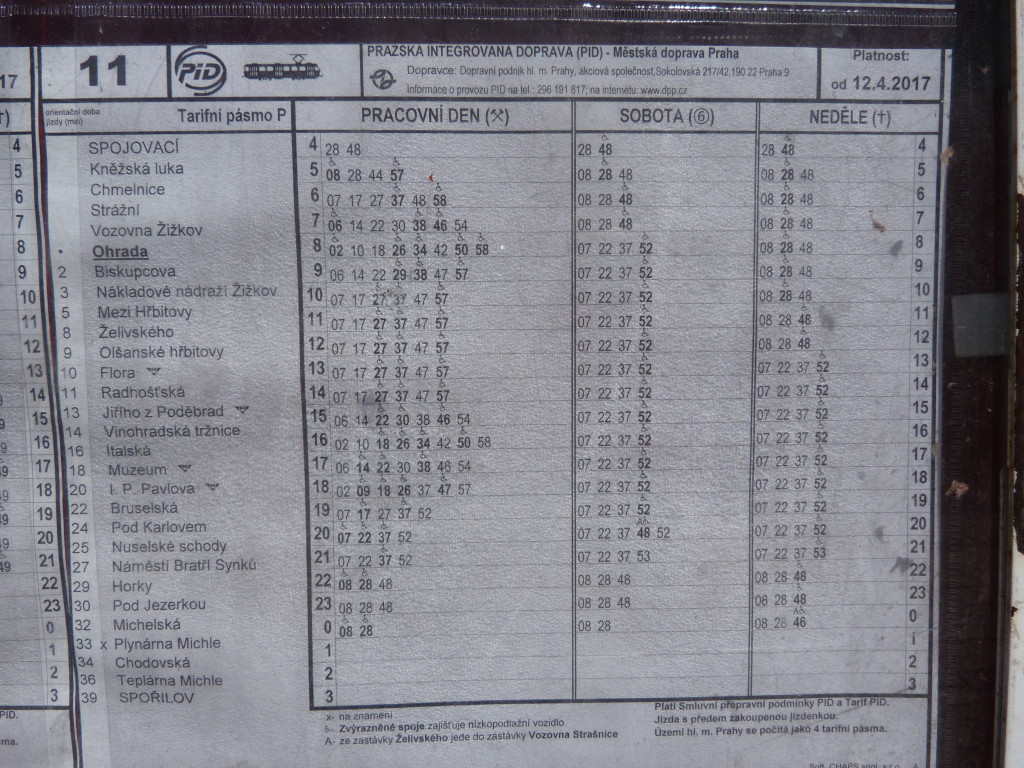 What the heck is this thing and what does it say? This is a tram schedule. The big number in the top left corner is the number of the tram, in this case, the 11. Below that, in the left-hand column is a list of tram stops with incomprehensible names. Don’t bother trying to pronounce them. You will fail. The tram stop name in bold is the tram stop where you are currently standing squinting at this dirty piece of plexiglass-protected paper, in this case, Ohrada. The tram is traveling downward on the page, so the following stops are the ones it will take you to. The stops listed above Ohrada are the stops that the tram has just come from. (So, obviously, if the stop you want is above, then cross the street and catch the tram going in the opposite direction.) The number to the left of the stop name tells you how many minutes it will take to get there from where you are now. The other three columns of numbers are the actual schedule which is split into Work Day (Pracovní Den), Saturday (Sobota), and Sunday (Neděle). The Czech Republic uses the 24-hour clock. So the bold numbers on the left side of the first column represent the hours, i.e., 4 stands for 4:00 a.m. and 23 stands for 11:00 p.m. The other numbers tell you at what minutes of the hour the tram will leave. Keep in mind that on public holidays the trams will generally always run on the Sunday schedule regardless of what day of the week it is. 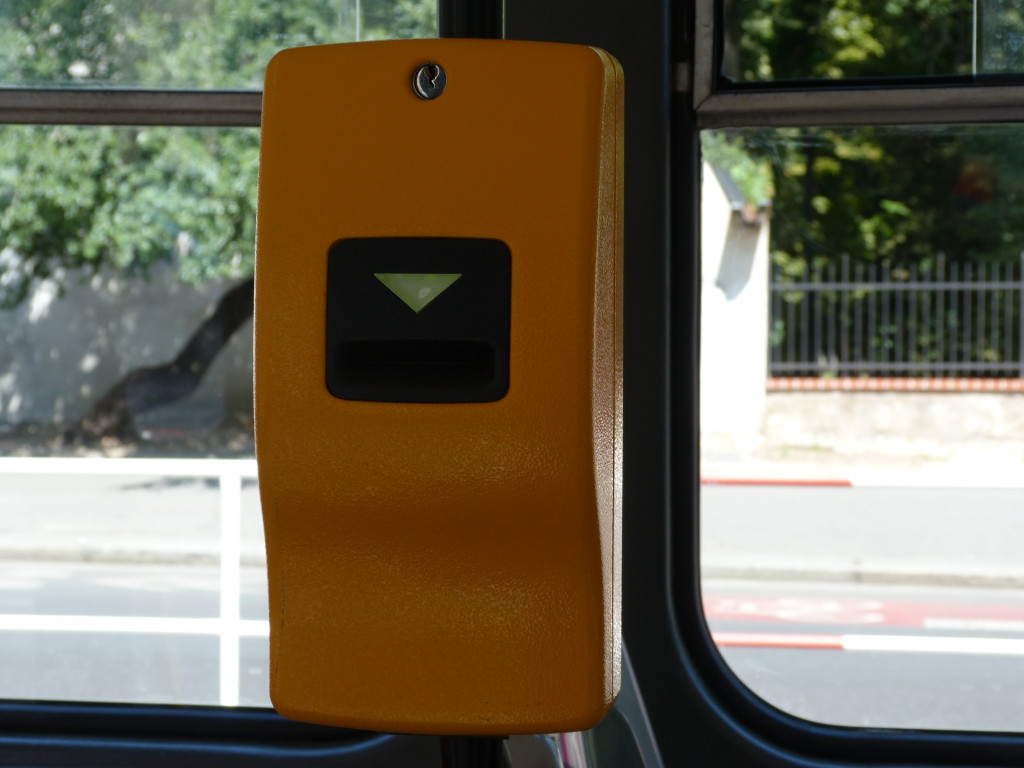 Validate your ticket! When you get on the tram, you have to stick your ticket into the slot on this little yellow box below the green arrow in order to have it time-stamped. These boxes are also present at the entrances to the metro stations. If you don’t do this, then the ticket is no good. If a man approaches you on the tram or metro and shows you a shiny little badge in the shape of the Prague MHD public transport logo, that means he is a ticket inspector and wants to see your ticket. If your ticket hasn’t been time-stamped, he will fine you 800 kc (about 30 Euro) which has to be paid on the spot. If you don’t have the cash on you, he will insist on escorting you to the nearest bank machine, or he will fetch the police.

The Prague metro map. Easy-peasy. Three lines, three simple colors – red, green, yellow. (The blue line will not take you anywhere unless you are in a boat. It represents the river.) The main train station is Hlavní Nádraží on the red line. From Nádraží Veleslavín on the green line you can catch bus 119 to and from the airport. 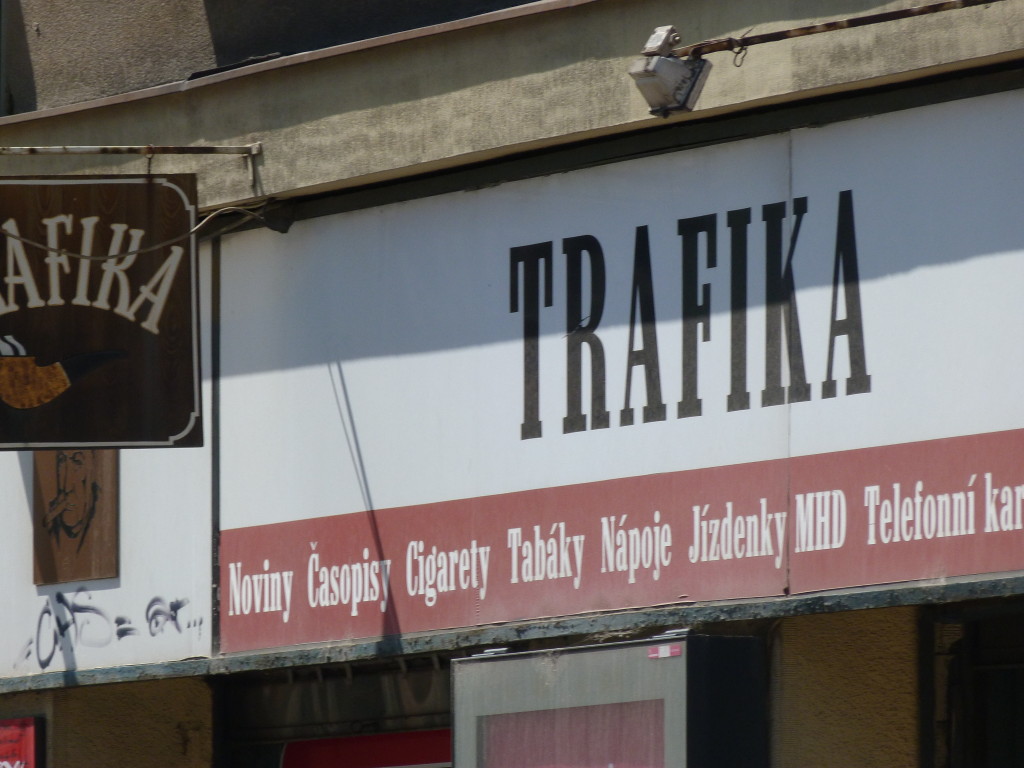 Where do you buy a ticket if you’re not at a metro station or if there isn’t a vending machine at your tram stop? Look around and you will surely see a trafika, usually in the form of a tiny storefront or even tinier free-standing kiosk. While you’re there, you can also pick up a newspaper, some cigarettes, a phone card, and a beer. 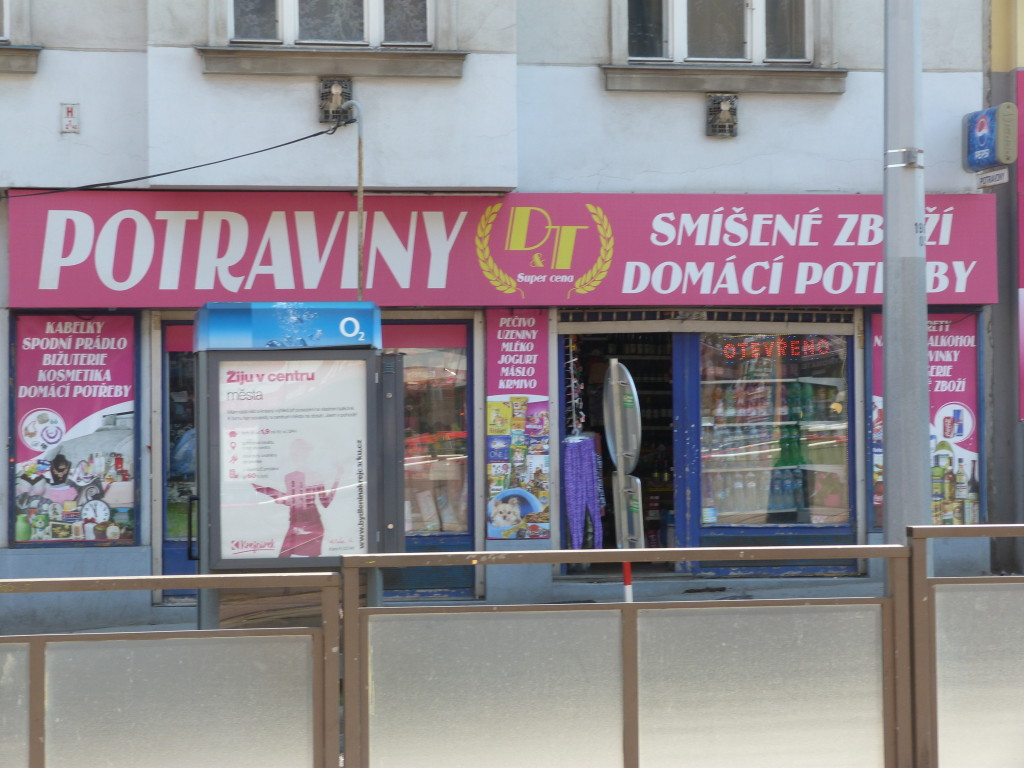 If you can’t find a trafika, then look for a potraviny. In western terms, this would be referred to as a convenience store. You have a 60/40 chance that a potraviny next to a tram stop will sell tram tickets. But it probably won’t have sexy pink signage like the one in my neighborhood.