The 20th century was particularly painful for the Czech nation. “Victorious February” (25th Feb 1948), was a government coup and complete takeover of the communists behind the steering wheel of Czechoslovakia.

Stalin and Gottwald side by side. “With Soviet union forever and never otherwise”. Propaganda of 1950’s was ubiquitous.

Communism as a philosophy emerged from the turmoil of the European industrial revolution, where the ordinary people were for the first time in history free to do whatever they wanted, but it was also the first time in the history where they could die on the street from hunger. You were free, but the freedom had very grave consequences. Something like support for unemployed people didn’t exist.

At that time, very small group of people owned almost everything and the rest of the society suffered. Two German gentlemen named Karl Marx and Frederic Engels came up with a very intriguing idea – how about if we take all of that money and estates from the rich people and we harmonically spread the wealth through the entire community?

This certainly was a very smart thinking, nevertheless practicing of this philosophy resulted in death of some 90 million people all around the world (so not that smart thinking overall).

The end of 19th and beginning of 20thcentury brought up the idea of panslavism – meaning that all of the Slavic nations should integrate into one superstate led by Russia. That also seemed like a smart thinking.

Since Russia (Soviet Union in fact) was from 1923 to 1953 led by Jossip Visarionovitch Stalin, a single most succesfull mass murderer in the history, you can guess yourself how smart the idea of panslavism was.

Soviet union later occupied eastern part of Europe, infected China and lots of other Asian and South-American countries with communism and trust me, for most of those countries it was not a good time.

Communists in the Czech Republic during the WWII received training and support from the Soviet communist party. Czech communists were preparing to take over the power in the after war Czechoslovakia.

However, the first democratic elections in the Czechoslovakia after WW2 happened in 1946, with communists winning only 20% of votes. The Soviet Embassy in Prague was very observant about the political situation in the country and as it reported to “the great 7” (top Soviet officials including Stalin, Molotov, Beria etc), “the Anglo-Saxon anti-communist powers gain strength and will endanger the communist position in the next elections.”

So, the brotherly Soviet Union dispatched a brigade of 400 secret service elites to little Czechoslovakia to make sure the right things will happen.

Following this day, everything was orchestrated as a drama in theater. Three non-communist parties in the coalition insisted on the negotiations about national security within the government, the prime minister (communist) refused to go through this agenda. The non-communist ministers threatened with handing in a resignation, which would inevitably lead to the fall of the government and early elections, which was no good for the communists because they would get much smaller share of the power than in the previous elections. So they built up the pressure on the president, who was the key figure. Their idea was that the president would accept the resignation of the non-communist ministers, but he would let the communists build up a government of one party. Their goal was so greedy, almost unbelievable. Fire 17 ministers and let the communist party substitute them with someone else. Elected or not. And although this was unimaginable and even unconstitutional, this is exactly what the Czechoslovakian president Edvard Benes did on the 25th of February 1948. Old and sick man at the end of his life was unable to withstand agresive pressure from the leading communists, signed whatever they wanted, and resigned

himself only a few months later. 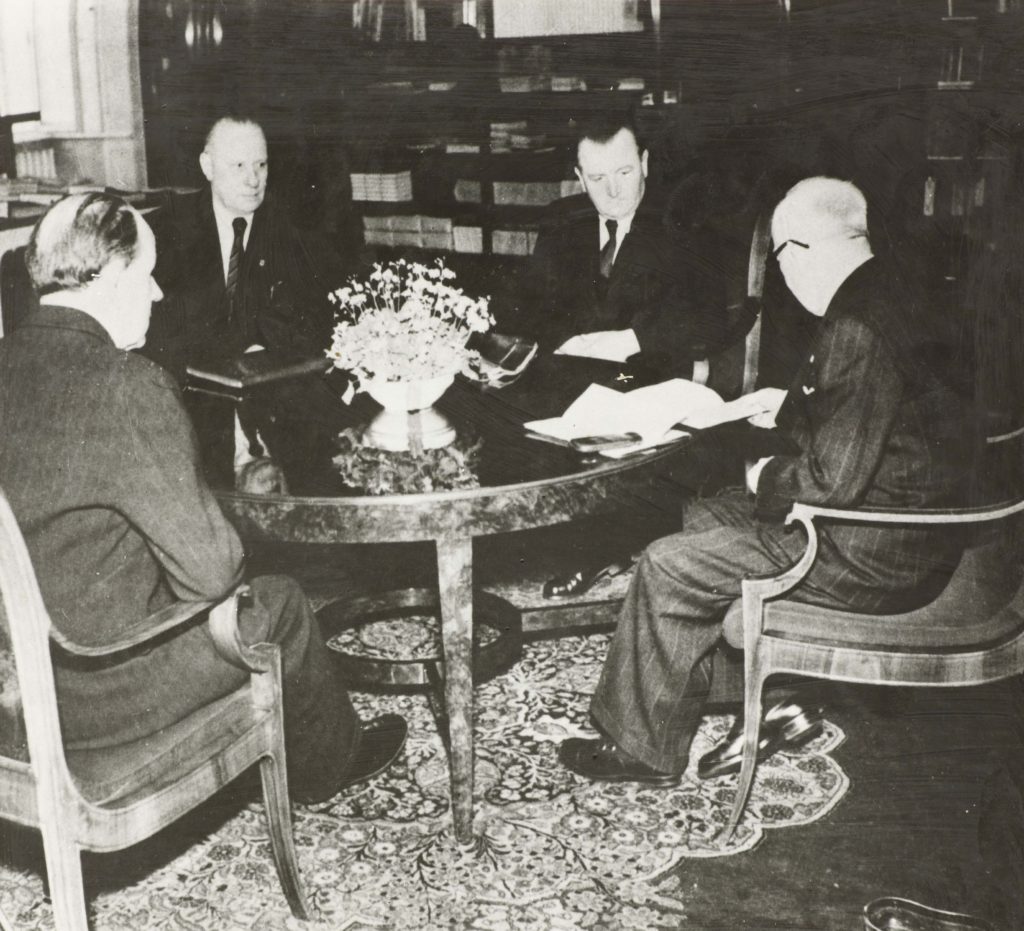 President Beneš on the right, Klement Gottwald, prime minister and future president, on the upper right side.

For the next 51 years, Czechoslovakia turned into a dictatorship. 1950’s turned into a killing machine aimed at those who didn’t share the communist ideology and liked, for example, parliamentary democracy and freedom.

And this very day, the 25th of February 1948, was until 1989 celebrated in Czechoslovakia as a “Victorious February”. Do you feel that sarcasm?

Soon, the revolution started to eat its own children –  lots of those, who helped to establish communism as a substantial political power in Czechoslovakia, were just couple of years away, between 1951-1953, sentenced to death or heavy and long prison sentences for espionage and high treason. The heroes were artificially turned into devils. 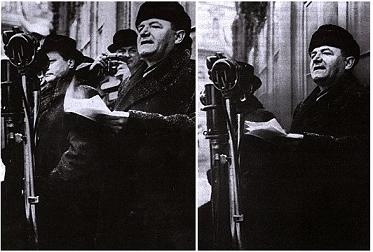 The left photo with Klement Gottwald (right) and Vladimir Clementis (behind the microphone). Right photo from 1953, when the wind of change blew Clementis into oblivion.