Český Krumlov is a picturesque small town in southern Bohemia with a beautifully restored historic center with Renaissance, Gothic and Baroque architecture which has been a UNESCO World Heritage Site since 1992. The town is one of the country’s most-visited destinations for both Czechs and foreigners alike, all seeking to enjoy the unique beauty of the castle high on hilltop and the winding maze-like streets of its compact medieval-feeling old town district below which is nestled in a horseshoe bend of the river Vltava. Český Krumlov is often referred to as sort of a Prague-in-miniature, though the aforementioned compactness and the very hilly nature of its central neighborhood make it quite pleasantly different from Prague in many ways. 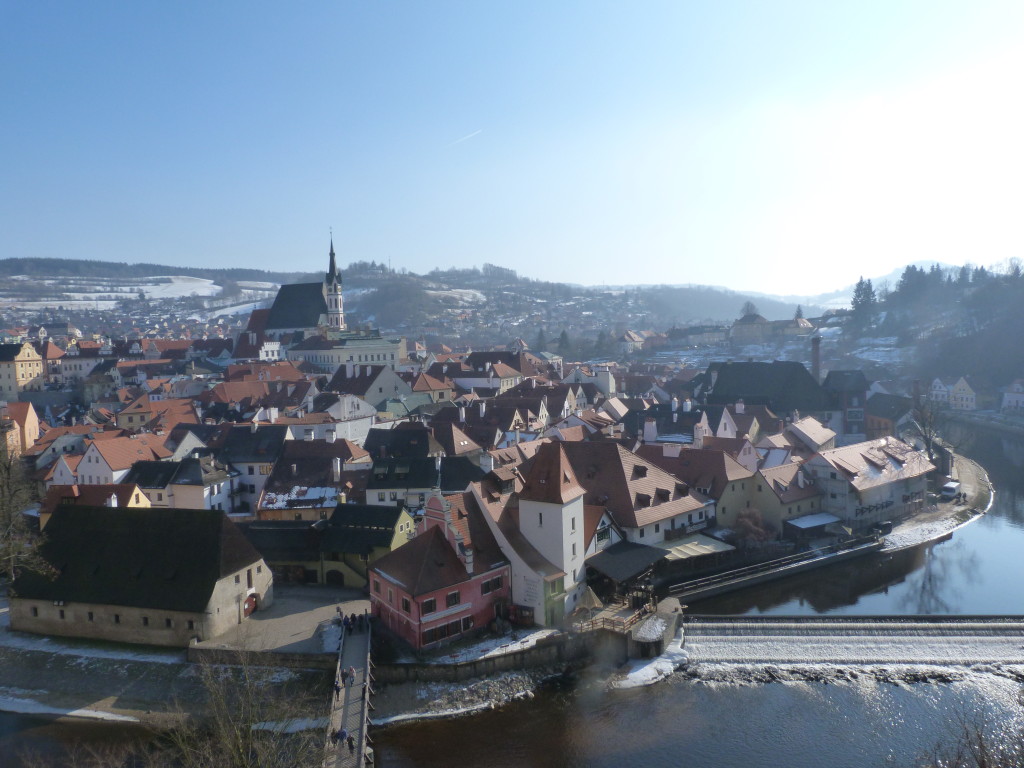 The view looking down from the castle.

There is record of human habitation in the region since sometime during the Older Stone Age (70,000-50,000 BCE) with a mass influx of settlement sometime around 1500 BCE. Celtic tribes began inhabiting the area around 400 BCE, and the Slavonic ancestors of the Czechs began arriving sometime in the 6th century CE.

The population center that became Český Krumlov was first established by the Vitkovci family in the mid 13th century when a small trading center was established at a river ford lying on an active Bohemian trade route. The original inhabitants were more German than Czech, and that demographic didn’t shift much over the next several centuries. In fact, it slanted more towards the German side when gold was discovered in the late 15th century and loads of German miners moved into the area.

Emperor Rudolf II of the Hapsburg dynasty purchased the town in 1602 and gave it to one of his sons for a time, but in 1622 Emperor Ferdinand II put the town under the control of the Eggenberg family as compensation for their financial support during the 30 Years War. At the end of the war in 1648 Český Krumlov was invaded by the Swedish army. After the Swedes departed, the town remained a possession of the Eggenbergs until the early 1700s when the family died out and it fell into the hands of their heirs, the Schwarzenbergs, where it remained until 1945 and the end of the Second World War. 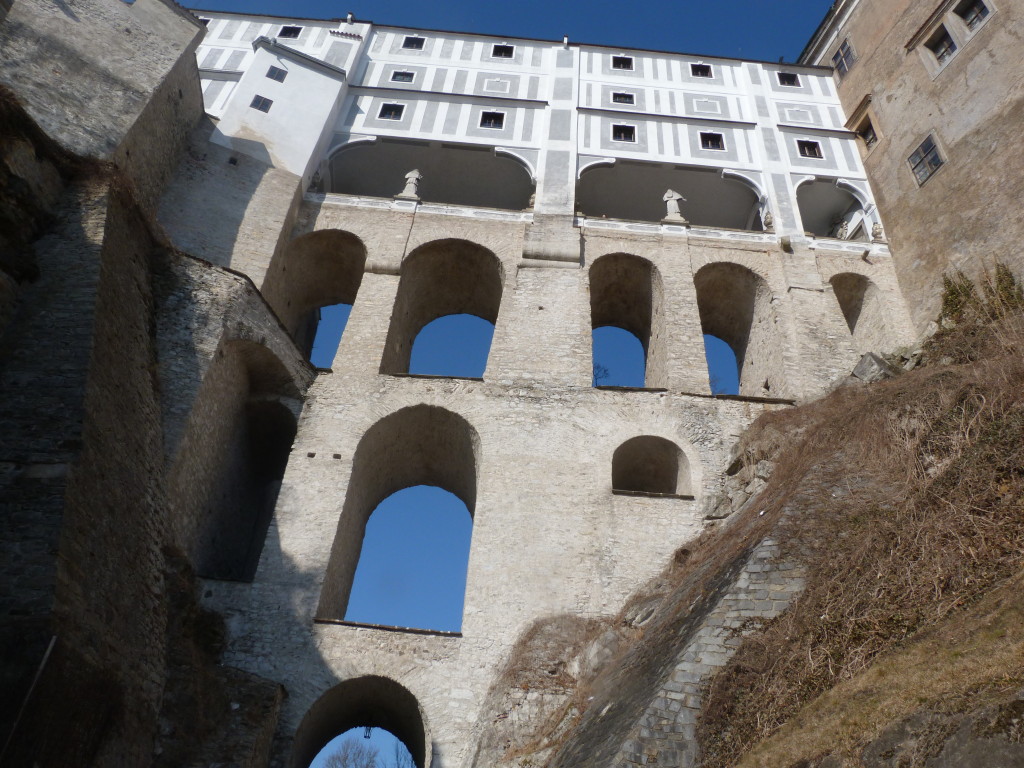 All along the watchtower.

Ethnic tensions between the town’s German and Czech inhabitants date back at least to the 19th century. At the conclusion of the First World War, when the first independent nation of Czechoslovakia was proclaimed on 28 October, 1918, the region’s German population reacted by proclaiming the Independent Šumava Province of Böhmerwaldgau which they intended to become part of a post-war Austria. However, the Czechoslovak military occupied the region and it remained a part of the fledgling Czechoslovak state. Then in 1938, just before the outbreak of the Second World War, the southern Bohemian region was ceded to Nazi Germany under the Munich Agreement. At the conclusion of the war in 1945, Český Krumlov was liberated by the American army, and then all of the area’s German inhabitants were expelled from the country under the Beneš government’s Decrees of Retribution.

During the Communist era which commenced in 1948, most of Český Krumlov’s marvelous architecture was allowed to fall into a state of decrepitude and disrepair. However, after the Velvet Revolution of 1989 which put an end to Communism in Czechoslovakia, the town’s historic sites were restored and revitalized and Český Krumlov became a UNESCO World Heritage Site in 1992. 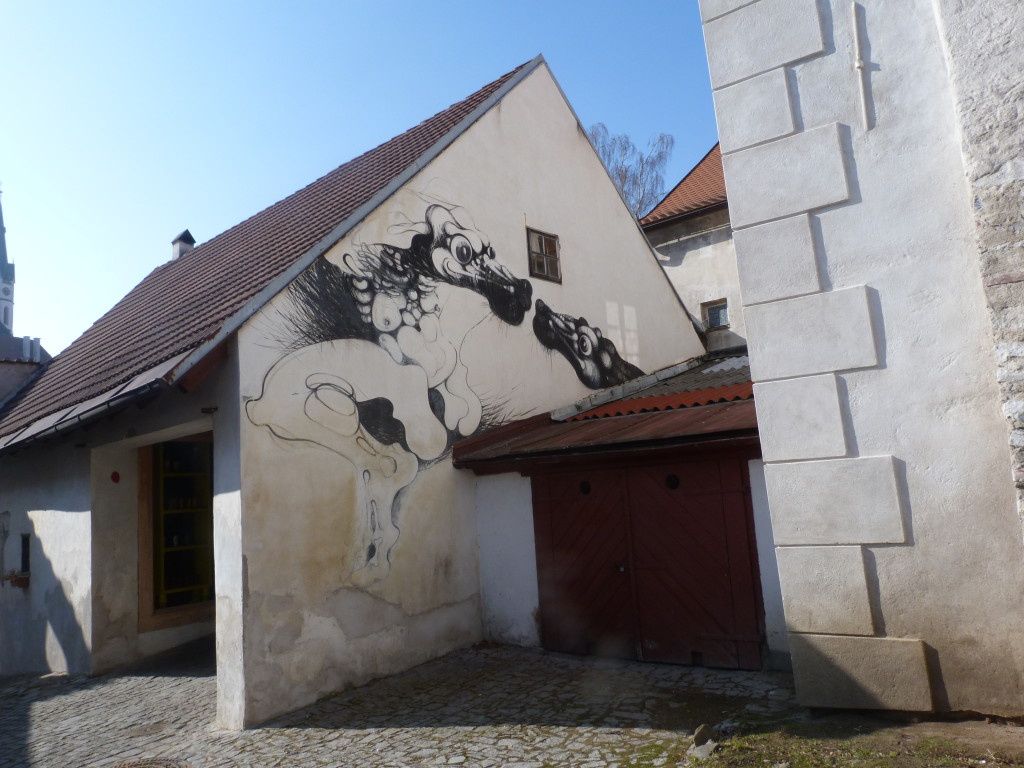 The modern visitor to Český Krumlov will discover a winding maze of alleys and streets containing quaint shops, restaurants, galleries, and a host of lively bars and other night spots. It’s a bit too far from Prague to make a comfortable day trip. The cheapest and easiest way to get there is a 3-hour bus ride from the Na Knížecí station in Smichov, and probably your best bet for transportation is to book your trip with the Student Agency bus line. Accommodation is plentiful and varied. You can stay in any style you choose, whether it be hostel, bed & breakfast, fancy hotel, or no-frills campground. Click here for a complete register of places to stay with their contact info and reservation websites included. One of the more interesting accommodations available is in the 500-year-old Krumlov Tower. Going for one night only gives you plenty of time to see the town, but if you stay for two, then you can also have a chance to hike or bike out into the surrounding countryside, which is also quite stunning. And while you’re visiting, you can learn all about the sites and more about the history of Český Krumlov by strolling around the town with our friends at Wiseman Free Walking Tour. They meet on the Main Square every day at 10:30 a.m. and 2:00 p.m.

We hope you found this article helpful, and enjoy your trip! 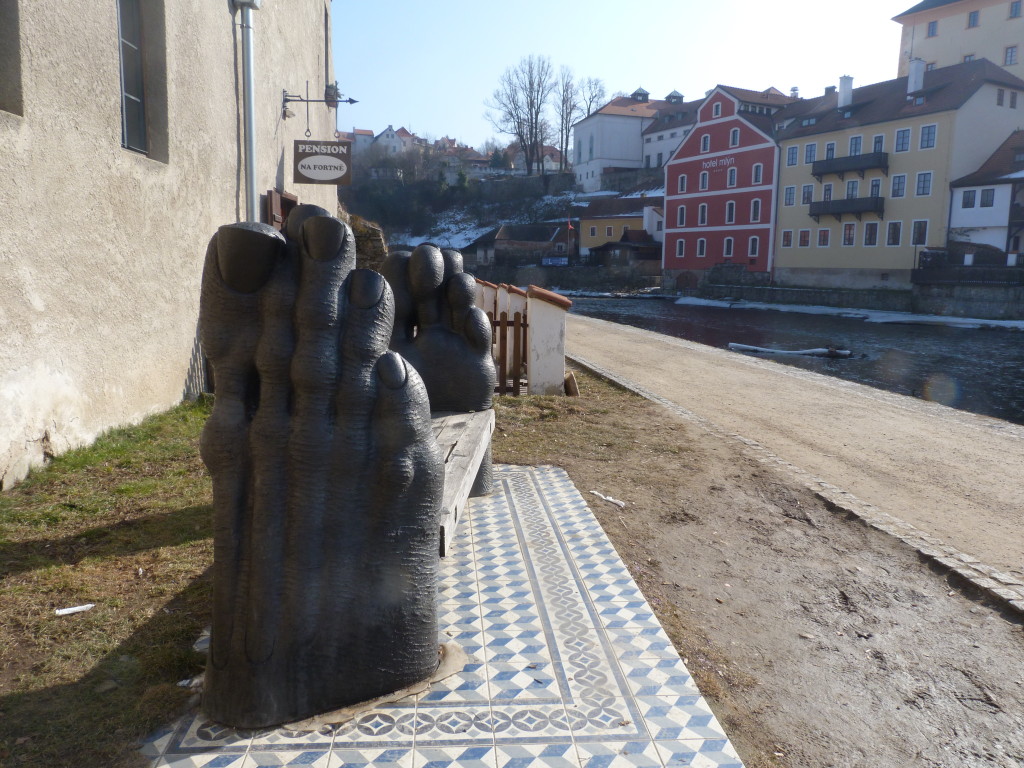 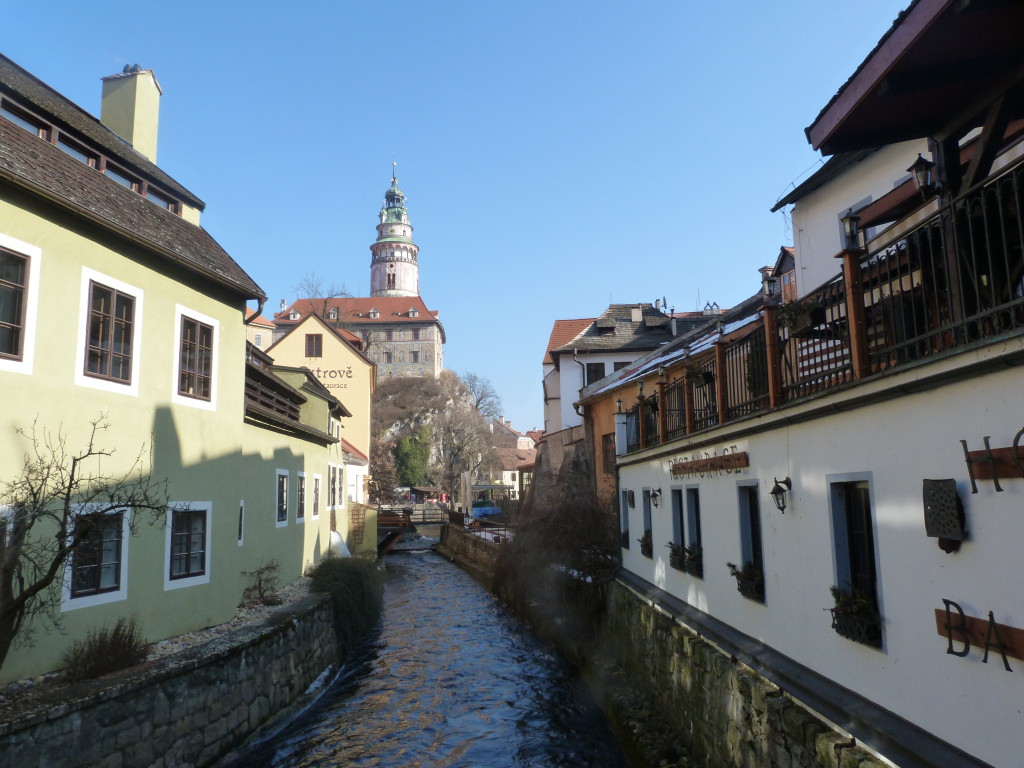 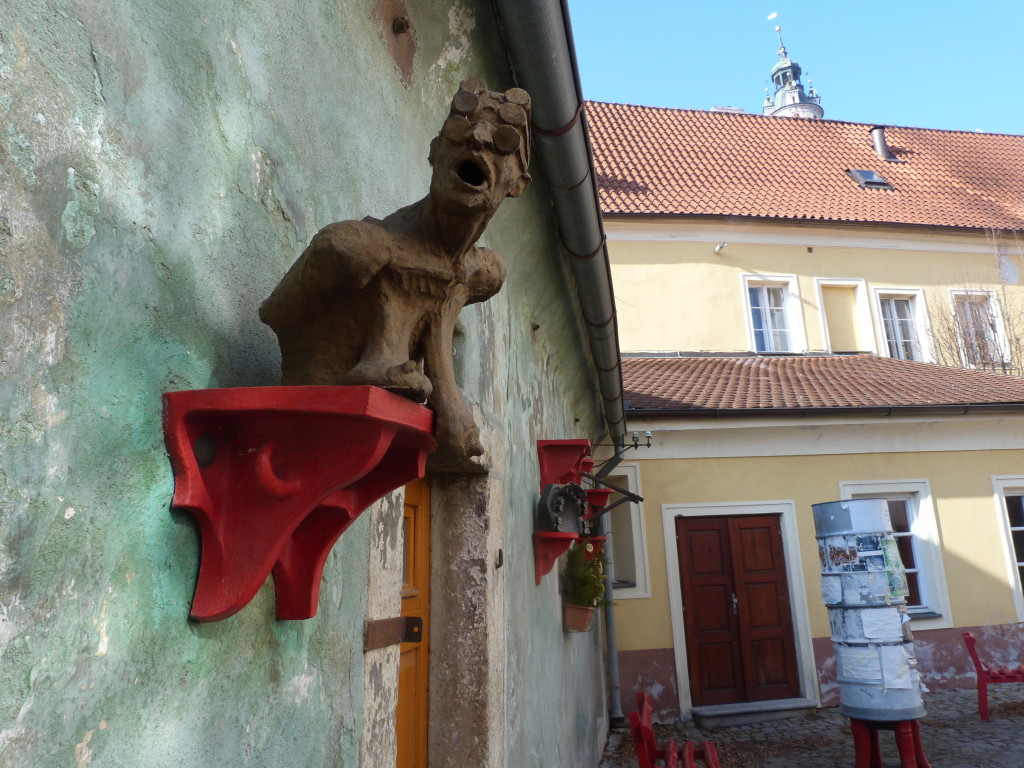 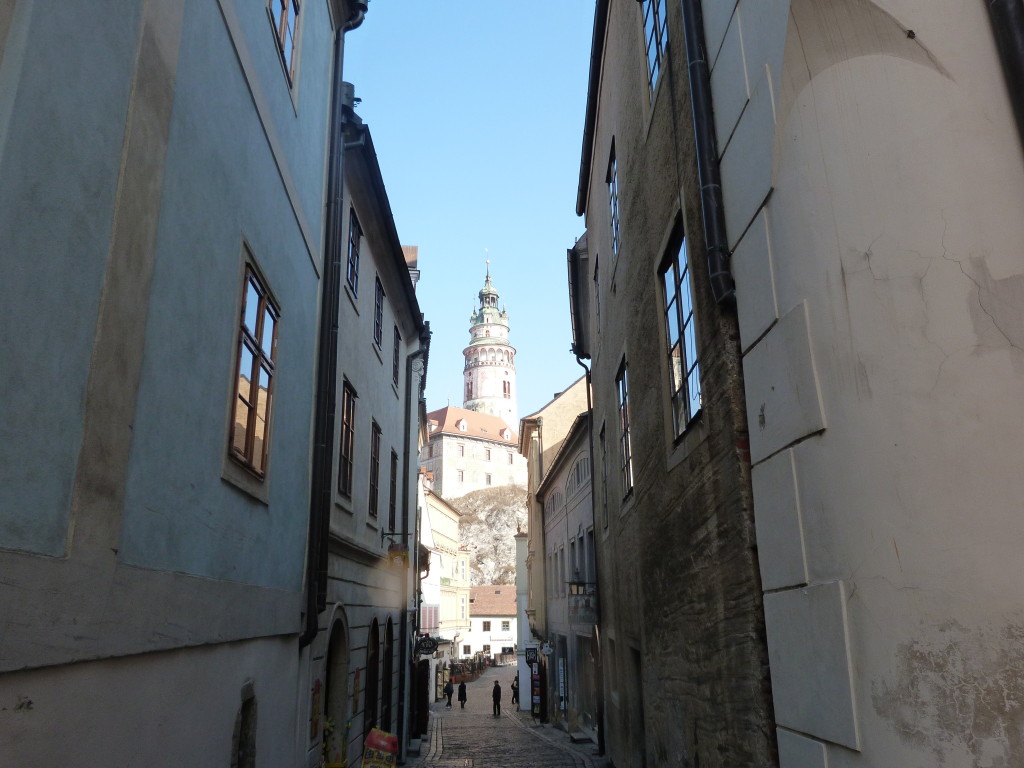