The Elbe Sandstone Mountains, formed from the sedimentary remains of the Jurassic sea bed, straddle the Czech-German border in the northwest corner of Bohemia, just a couple of hours distant from Prague by train or car. This region has long been known as Bohemian Switzerland and Saxon Switzerland, depending on which side of the border you’re looking at, and its beautifully intricate wind- and water-carved rock formations have been an inspiration to painters, poets, and outdoorsy people for centuries. In January of 2001, the Czech part of the mountains was incorporated into the Bohemian Switzerland National Park, and it is without doubt one of the most beautiful and unique places in the country which is accessible for a day trip from Prague. 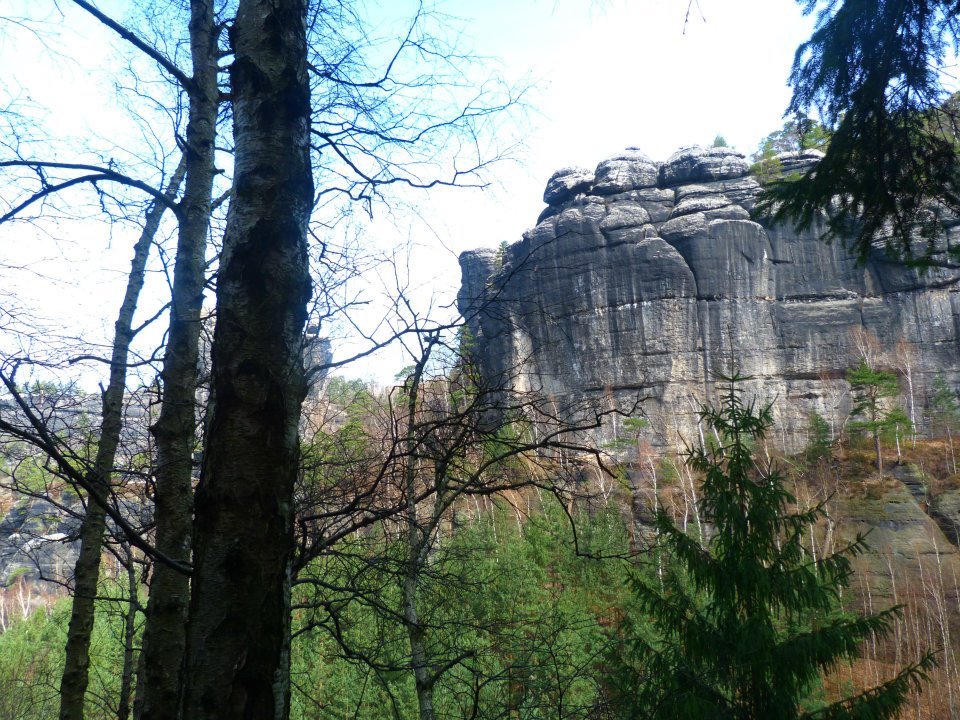 Getting there by train and bus via the town of Děčín or other destinations is doable, though it can make for a long day and can be a little tricky if you’ve never been to the area before. And now with the advance of autumn and the shortening of the daylight hours, you have to leave the city pretty early in the morning to make sure you get there in time to have a decent hike without getting caught in the dark at the end of it. A good way to make the journey worry-free is to hook up with our friends at Northern Hikes, a small owner-operated tour company founded not too long ago by Vít Slezák, a Bohemian Switzerland native. They’ll pick you up in Prague at your hostel or hotel, drive you to the mountains, take you on a serious hike (or an easier one, if you prefer), and return you safe and sound from whence you came. 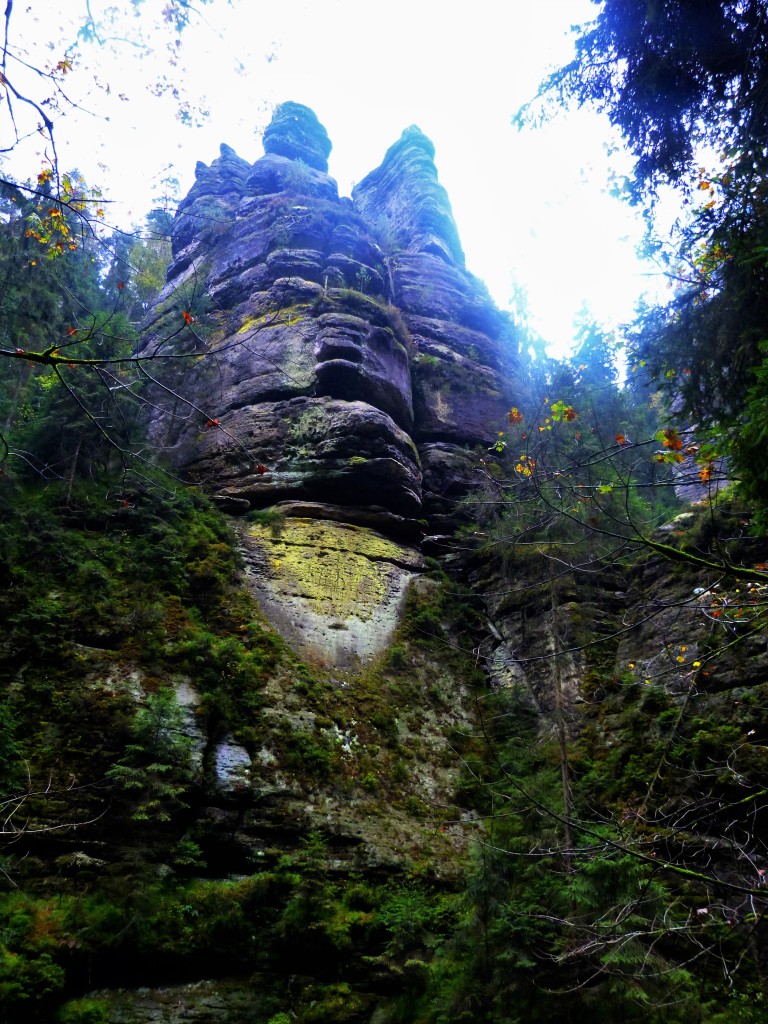 View looking up from the Wild Gorge.

This past weekend, we did exactly that and, though we’ve been to the area several times already, Northern Hikes was able to show us a number of places that we’d never visited on our previous trips. Since my partner and I live in Prague already, we hooked up with the tour at a hotel in the center where the rest of the group was being picked up, and then spent a couple of hours in the comfort of their van (with a snack provided) driving north until we reached the picturesque landscape of the Elbe river valley (Labe river valley in Czech). From there, we made our way to the small border village of Hřensko and beyond to the even smaller village of Mezní Louka where we parked the van and embarked on the first phase of our day. All along the way, our guide Marek pointed out different sites of historical and current interest, and filled us in on the back story of the places we passed through. 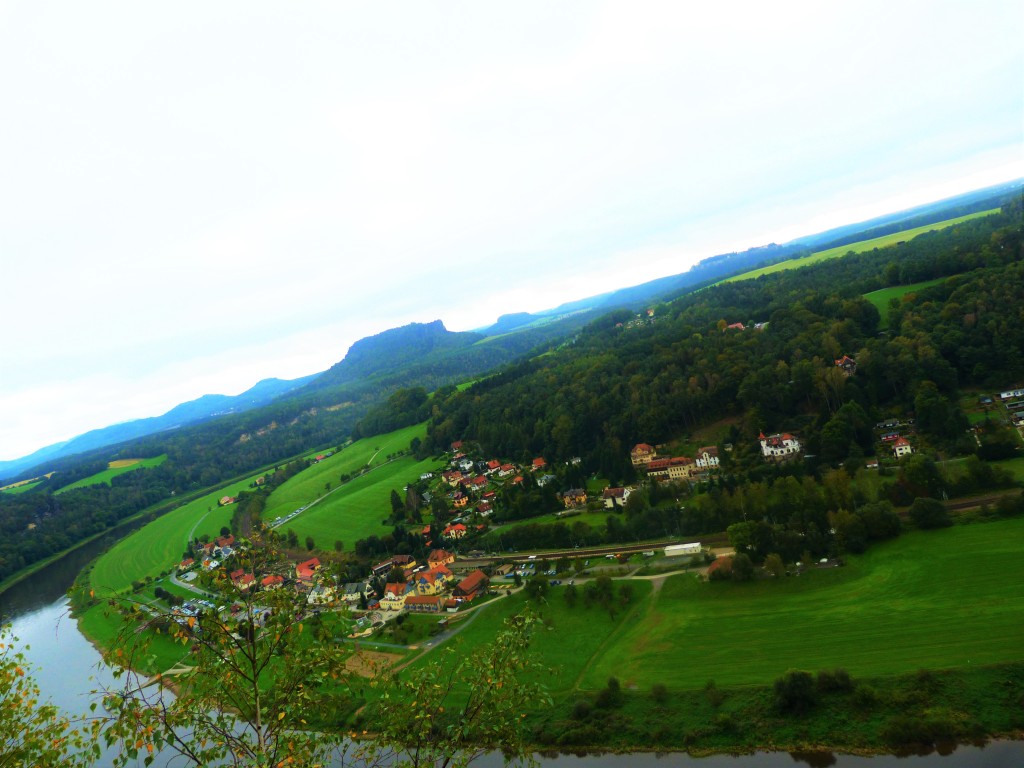 After a short walk down a narrow wooded road, we turned off onto a path of log and sandstone stairways that plunged down into the depths of Divoká Soutěska, the Wild Gorge. During the descent, Marek stopped us several times to explain things about the nature of the fragile environment through which we were trekking and to describe the different protected zones through which we passed. He was an expert on the geology and forestry of the area and taught us how the magnificent topography around us had come into being. At the bottom of the Wild Gorge flows the Kamenice river which makes parts of the narrow canyon accessible only by gondola, which was to be our mode of transportation for the next leg of the journey. The gondolier made sure we were all comfortable in his craft and then transported us a ways down the river, where we disembarked and continued on foot through a wonderland of still-green woods and natural sandstone castles. Several kilometers later, we arrived back at Mezní Louka and then sat down to an excellent lunch (with vegetarian options) at a quaint mountain lodge where I opted for the delicious wild boar gulaš. 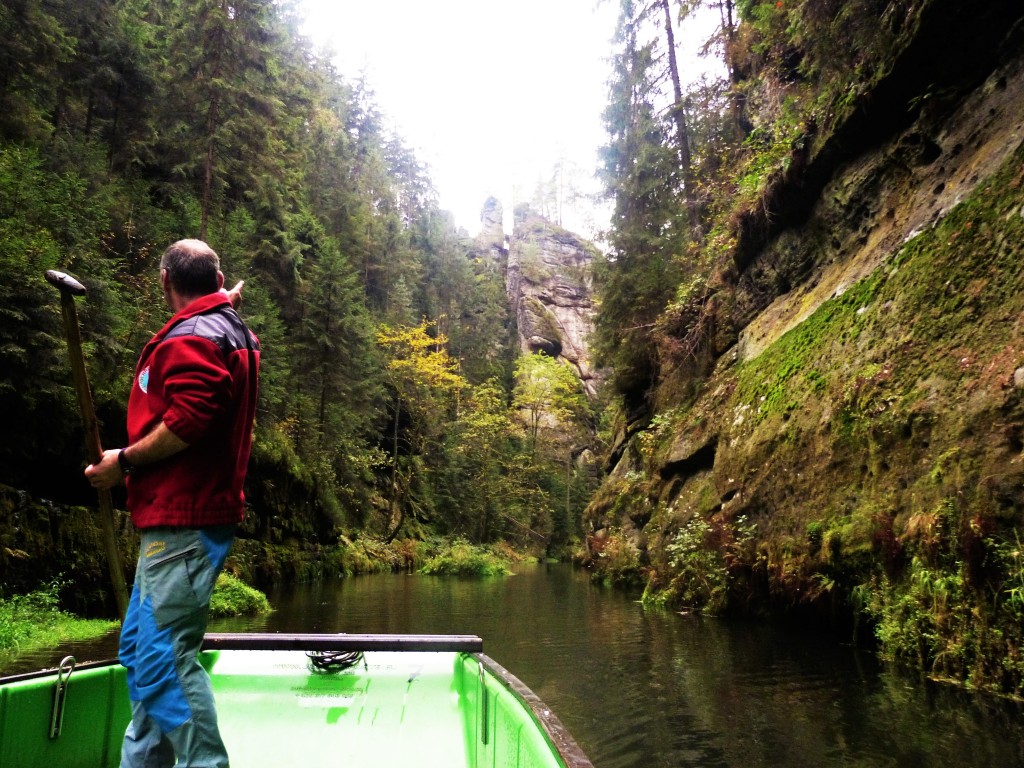 Aboard the gondola on the Kamenice river at the bottom of the Wild Gorge.

Then we piled back into the van and drove a few minutes to the day’s next destination, the Bastei rock formation on the other side of the German border. This natural bastion of sandstone juts up starkly almost 200 meters above the Elbe river valley, and in medieval times had a small defensive castle and outbuildings perched tree-house-style among the tops of its jagged crags. In modern times the outcroppings are connected one to another by the 165-year-old Bastei Bridge. As always, Marek was a wealth of information about the history and geology of the area. 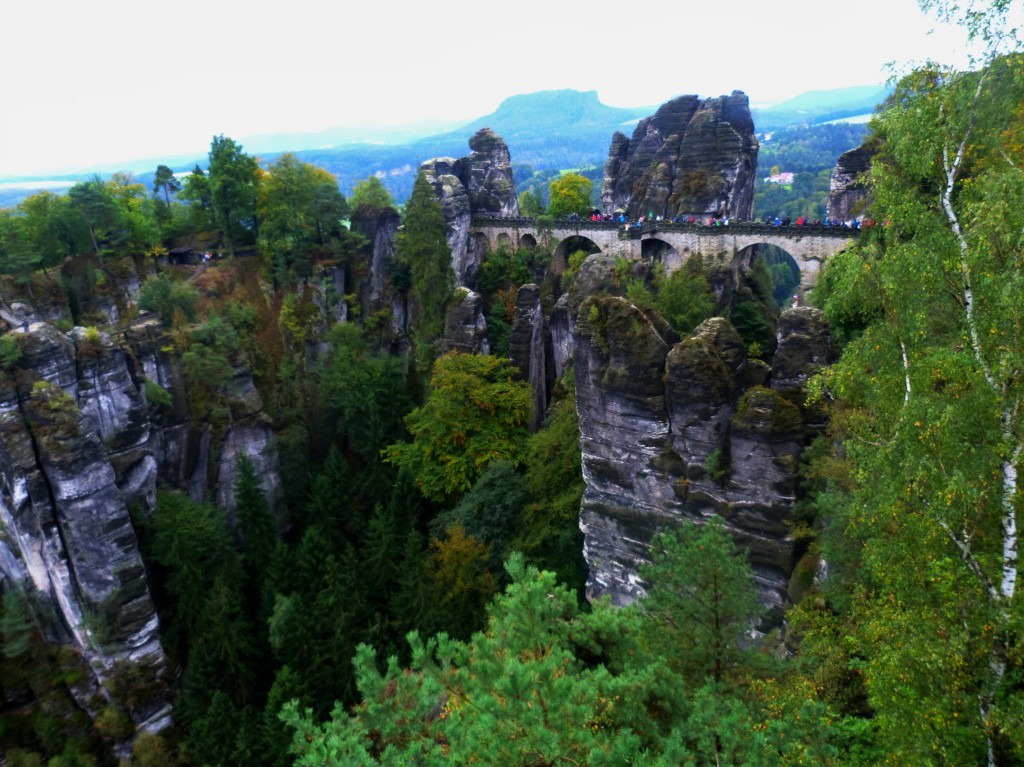 The Bastei bridge. The day was a bit grey and drizzly and our guide Marek offered us rain gear in case we didn’t have our own.

Our next and final stop took us back into the Czech lands where we visited the natural labyrinth of the Tisá rocks, parts of which appear as the gateway to Narnia in the well-known film The Lion, The Witch, And The Wardrobe. Marek lead us through a maze of elaborate sandstone towers and caves and again explained the history and natural features of the region. We returned to the van pleasantly tired and with heads full of memories of an exceptional journey through some of the most magnificent parts of this beautiful country, and dozed our way back to Prague looking forward to our next chance to visit Bohemian Switzerland. 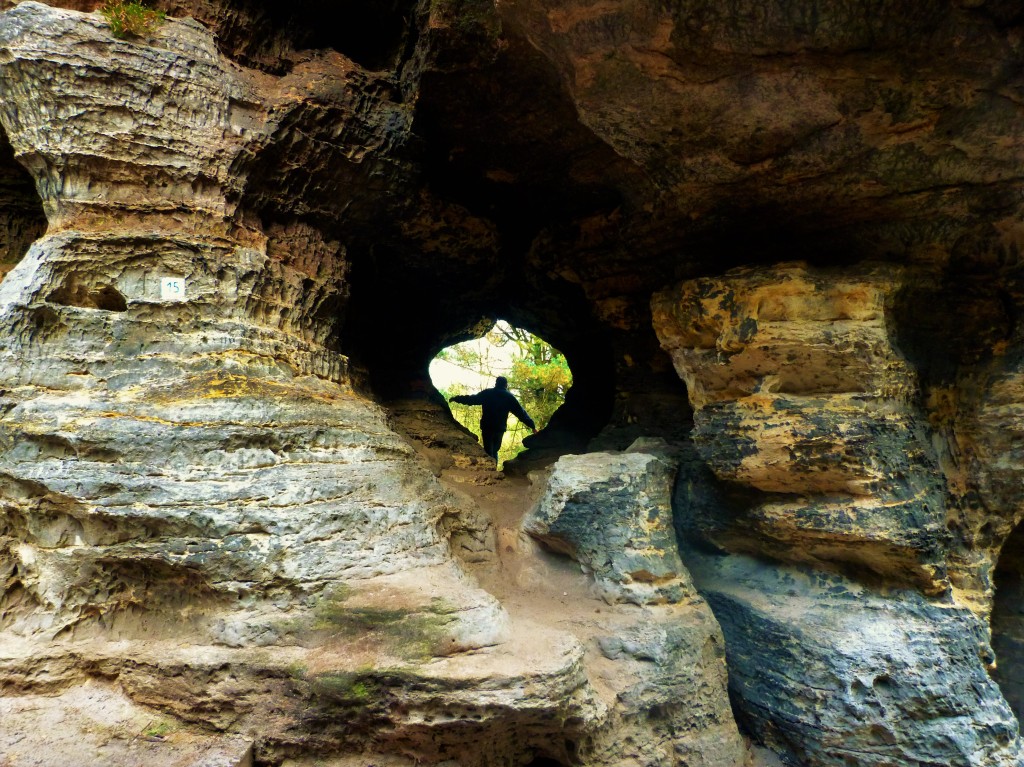 A cave in the Tisa rocks.

Luckily for us, we live here. So our next opportunity to get up there again will come as soon as we can find a free weekend. For anybody visiting Prague, any season of the year, I would honestly recommend a trip to Bohemian Switzerland with Northern Hikes. They’re clearly a company with a nature- and conservation-oriented ethos run by people who truly love and care about the forests and mountains they visit. They don’t just take you there to look around, they also educate you about what you’re seeing and why it’s such a special place. Don’t worry if you’re not a mountaineer. The trip I’ve just described is accessible to just about anybody capable of climbing a short flight of stairs. If you’re capable of spending a few hours walking around with a Prague Extravaganza tour, then you’re certainly up to this trip with Northern Hikes. And for those of you with a more robust taste for mountain trekking, they offer a couple of more strenuous treks as well. 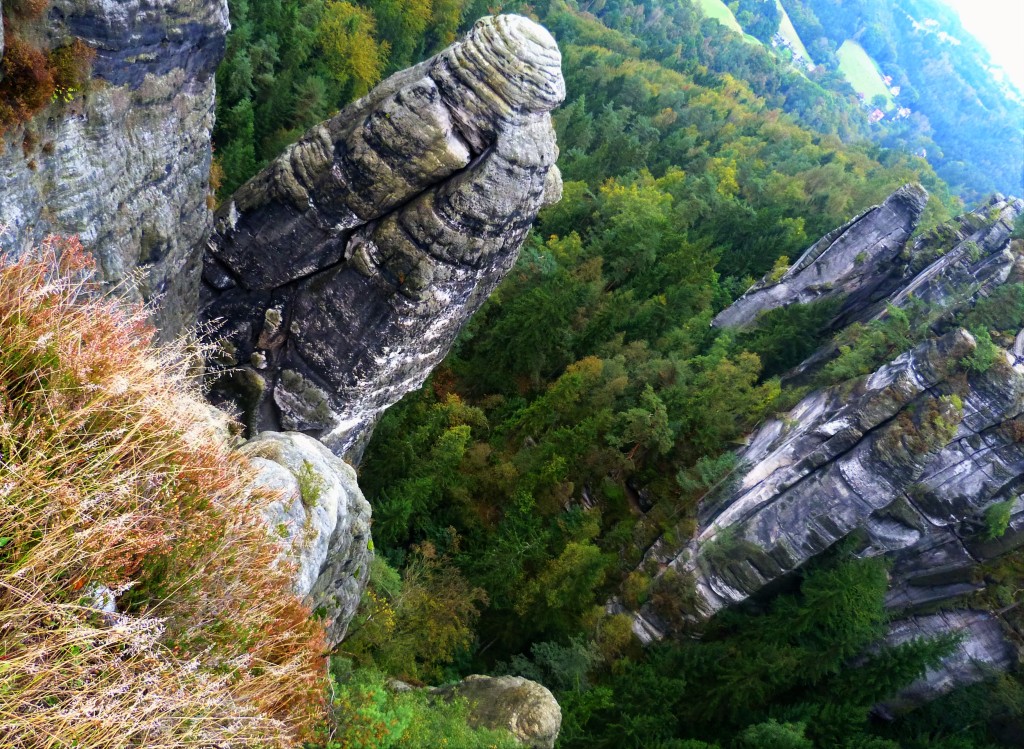 Watching your step in the Bastei: it’s a long way down…