There are many different museums in Prague which cater to many different interests. The largest and most well-known of these is the National Museum, but since its main building at the top of Wenceslas Square is currently closed for reconstruction and will remain so for the foreseeable future, maybe you’re not sure where else you might like to go to experience some educational exhibits that will teach you something about the city that you didn’t already know. Don’t let that slow you down. Just read this list of small independent places that I’ve compiled this week, and you’ll most likely find a few suggestions that will expand your knowledge of Prague in ways that you probably wouldn’t have expected that that knowledge could be enlarged. 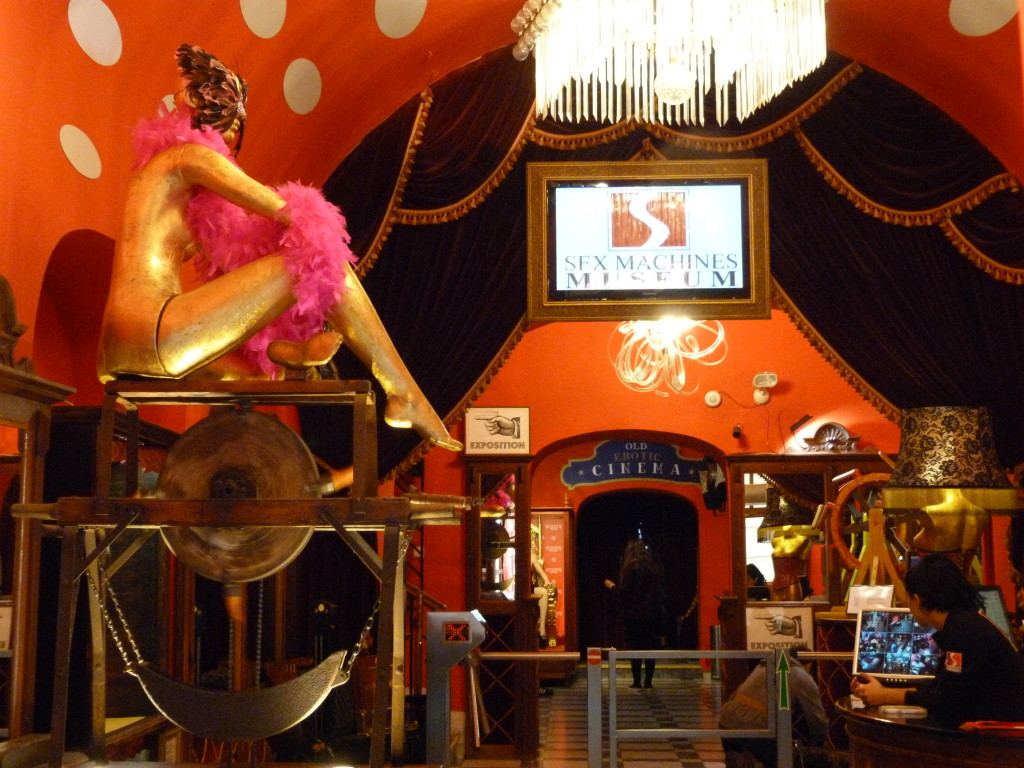 Enter the Sex Machines Museum. It has nothing at all to do with James Brown. That I know of.

What about sex toys? Are you an expert in the field? Do you feel that you already have an adequate grasp of this subject, or would you like to find out a few more little-known facts about the matter that you can use to titillate and amuse your friends and especially your family when you return home? If the latter is the case, then right off of the Old Town Square at Melantrichova 18 you’ll find the Sex Machines Museum. According to its literature, it’s the only museum in the entire world completely dedicated to so-called “marital aids”. So if you feel inclined to visit, then you’ll no-doubt know more about this subject than any of your unenlightened contemporaries could ever hope to learn. For your personal gratification, they’ve redesigned and reconstructed their interior in the past couple of years, updated their exhibits, and also now offer a small erotic cinema where you can view a couple of vintage Spanish films from the 1920s. 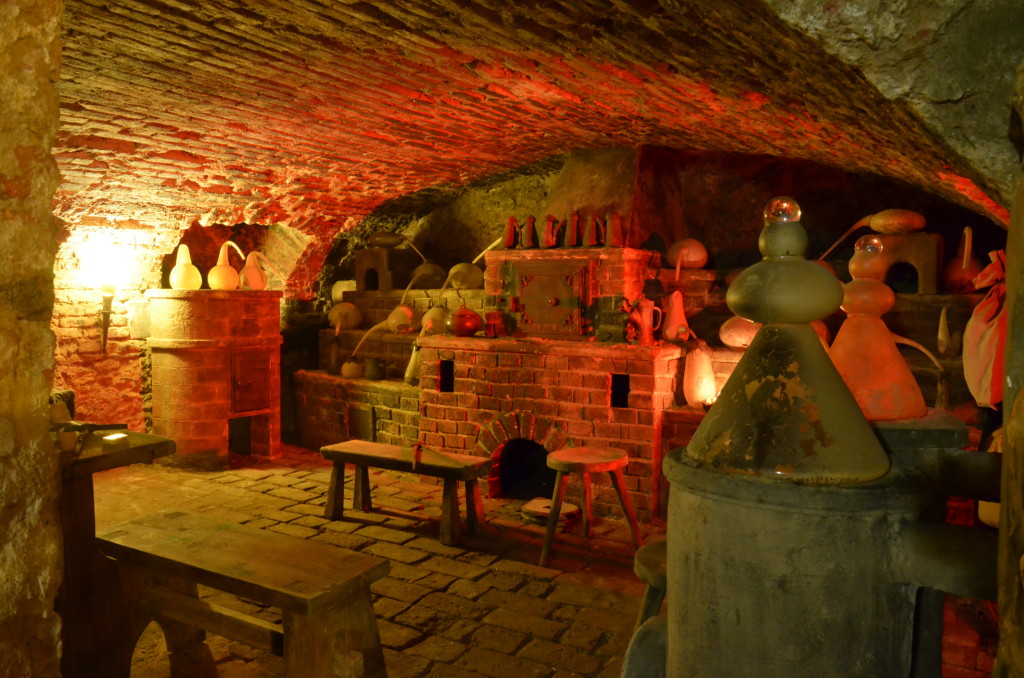 Or maybe you’d rather be a little more cerebral and find out something about the magical practices and esoteric heritage of the Old World? In that case, maybe the place for you is the Speculum Alchemiae, an establishment dedicated to the study of European alchemy. Did you think alchemy was simply about crooked old sorcerers trying to figure out how to turn lead into gold? No way. It was actually an esoteric practice by which learned people in olden times strove to gain a complete understanding of the knowledge of the Supreme Being and by which they might attain a god-like state of existence. Sound fun? Then the alchemy museum is probably the place for you. One of the interesting things about this establishment, Speculum Alchemiae’s Daniela Zádová tells me, is “ the fact that in 2002 during the floods, one of the tunnels leading out of the house [where] we are currently located collapsed, and in the basement the original alchemical laboratories of [the] 16th century were found… People who used to live in this area of the city are always surprised to learn about the laboratories, as they think they knew the city, but obviously they didn’t know about this.” 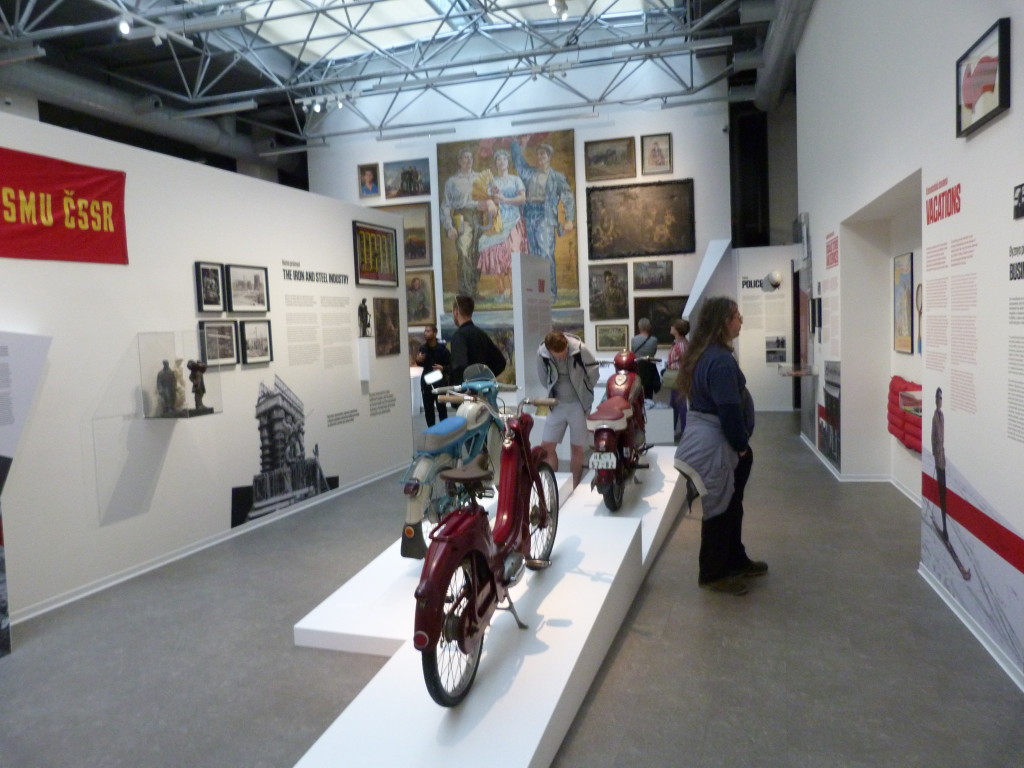 The Museum of Communism’s new location at Republic Square.

Or maybe you’d like to have an experience that’s more about the modern history of the Czech Republic. In that case, you could check out the Museum of Communism in its new location on Náměstí Republiky at V Celnici 4, right next to the main entrance of Billa supermarket, where they’ve expanded and modernized their facilities. I met with owner Glenn Spicker, a former American political science and history student who’s been here since just after the downfall of Communisim, and he told me a few things about their new location. “It’s f**king great!” he says. “We have 1500 sq. meters. There’s a gift shop, cafe, film room, and it’s a really, really nice space, high glass ceilings, all natural light… We redid it to a really high professional standard. All the text has been redone. There’s a lot of great photographs. We hired a special archivist, a lot of interviews people can put the headphones on and listen to.” I asked him what was the original philosophy of the museum. “We built it sort of with the idea of by Czechs and for Czechs. Even though we knew that the Czechs weren’t going to be the main people that would come, we made it for them. We made it for their opinions. So the writers that we used, the people from the theater we used, everyone on the project was Czech, and I would let their opinions stand. Originally is was Ján Kaplan who came up with the Dream, Reality, Nightmare [concept] – a three-act tragedy. And we’ve kept that. We’ve just kind of expanded it and broadened it. It’s all the stuff that I’ve collected and hoarded at the farmhouse for 25 years. Jaime Mandelbaum, he’s the creative director of Young & Rubicam [the global marketing communications firm], he did all the graphics and all the design and identity-type work.” I was in the new facility this week and I have to agree with Spicker that it’s pretty impressive. Though I do miss the irony of the old location when the Museum of Communism was next-door to a casino and upstairs from a MacDonald’s.

Another museum project that Spicker has in the works is the Czech Poster Museum which will be opening in December 2017 on Malostranska  Náměstí, just before Christmas. “My original idea,” he says, “was a visual history of the nation, the history of chromolithographic printing. But we need a little more time to put that together… It’s been harder than I expected, getting the curator, getting the academic community together. I mean, maybe I have 600 posters, but how do you break them down to themes? We’ve been talking to a lot of people at UMPRUM [academy of arts] that either teach there or have studied there, to try to get them involved with us… But for now we’re gonna have fun with it… The first two exhibits are gonna be Shopping Behind The Iron Curtain, and the second one will be Food Porn. It’s all food and drink posters from 1897 to 1989. This was how they reached people before they had the radio and everything. It’s street art. They were made for everybody… They’re pop art. And when you look at them now, maybe it’s a toothpaste commercial or something, half the time the slogans are really funny. Everything looks strange.” So look for that coming up in a couple of months. 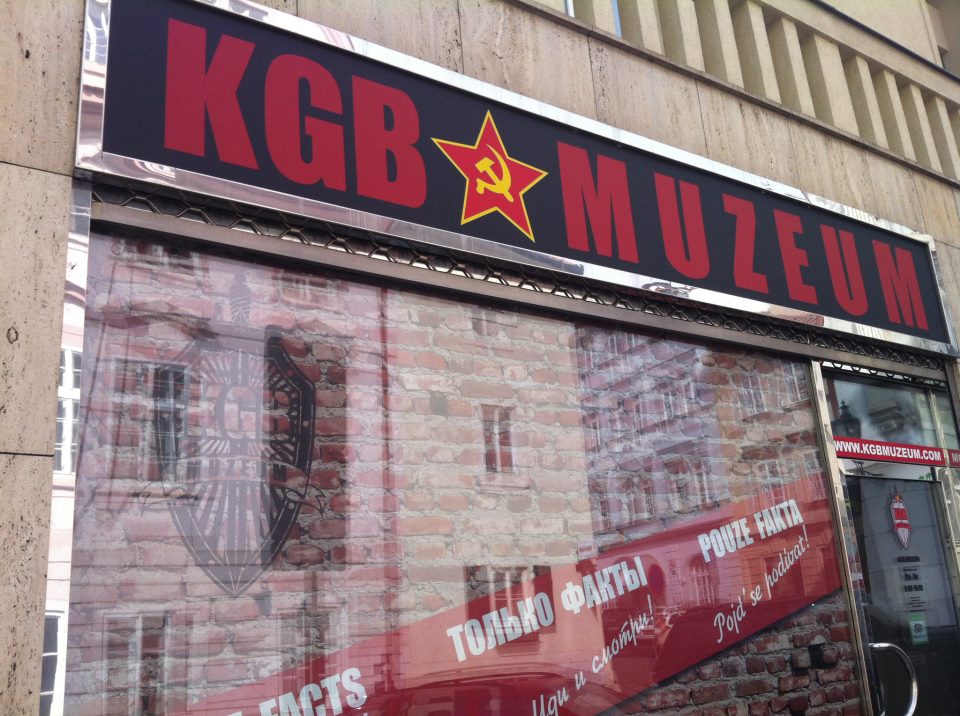 A window into the creepier side of the Cold War.

Another museum that might be of interest to those who want to learn more about the history of Communism, is the KGB Museum located at Vlašska 13 in the Malá Strana district.  According to their website, their exhibits contain many items “which belonged to the first persons of the Soviet state, the heads of the Cheka-NKVD-GPU-OGPU-MGB-KGB, the senior functionaries of the soviet state security.” There you can also view a special photo exposition of Prague as seen through the eyes of a KGB officer in 1968, the year of the Soviet invasion of Czechoslovakia, as well as equipment from the laboratories of the KGB, the death mask of Lenin, and the Trotsky murder weapon. Though I have to wonder if this is the actual axe that was used to smash Trotsky in the head in Mexico in 1940, or if it’s just a replica, I wasn’t able to find that out. When I contacted the KGB Museum to ask a few questions and to see if they had a bit more in-depth information that they’d like to share about their facility, I quickly received a reply informing me that the museum staff were not allowed to give interviews to the media. (Gee, I’m “media” now. Cool.) Subsequent attempts at contact went unanswered. All very mysterious, all very Cold War cloak-n-dagger sounding. You’ll have to go check it out for yourself and interrogate them on your own. 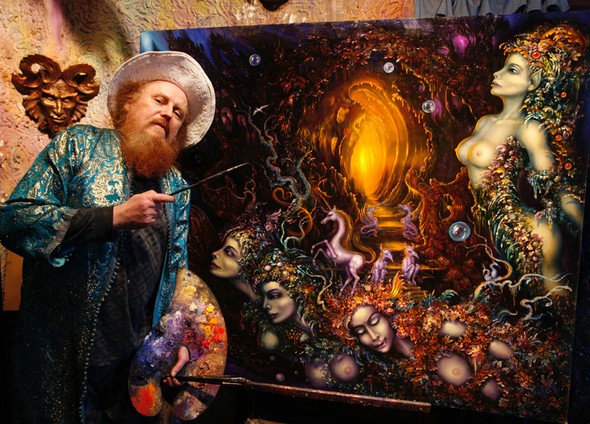 Welcome to Argonia. Enjoy your stay.

The last interesting little nook that I’ll mention today is the Reon Argondian Magical Cavern which is up on the hill in Petřín park. Inside of a small three-story building perched high above the city, you’ll find dozens of paintings housed in a structure which has been made into a work of art itself, it’s various rooms and passages molded into a fantasy world of subterranean oddness. All of the works of art on display are representations of the artist’s imaginary realm of Argondia. Reon Argondian is a Czech artists who left the country at a young age in 1968 to study art abroad, and who credits working on the restoration of the painting St. Christopher by Hieronymus Bosch in Switzerland for giving him the original inspiration to create magical Argondia. The place is quite a head trip and deserves to be seen, both inside and out. You can reach it by taking the funicular rail car from the bottom of  Petřín park near the Ujezd tram stop, and getting off at the first stop as the cable car goes up the hill. Look for the Magical Cavern posters when you disembark, and follow them until you find it nearby.