Exactly 30 years ago, a student protest against communist rule was put down in Narodni street in Prague and this rebellion became known as the Velvet Revolution. Why velvet? Because Czechs like metaphors and velvet fabric is soft and smooth, which translates to peaceful and non-violent.  The organisers of the revolution agreed that they would not carry any guns or explosives, but only flowers and candles. 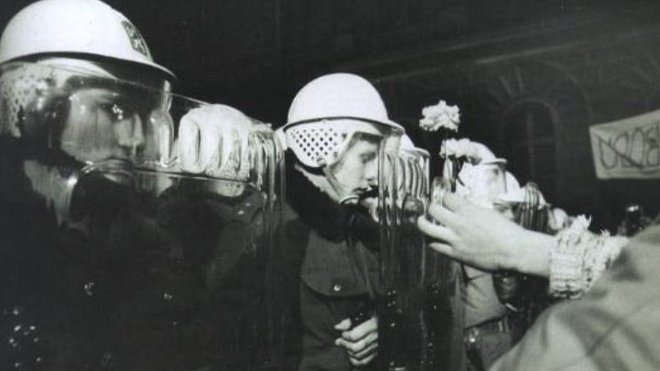 The students are bringing the flowers to a riot police.

In the evening of 17th of November 1989 thousands of students marched peacefully through the city centre, until they were stopped at Narodni (National) Street by a cordon of riot police, which brutally attacked the crowd and 600 people ended with serious injuries. Back then the university  studies were available mainly for prominent students whose parents had to be members of Communist party of Czechoslovakia. But the parents were the first people who upported their kids with following thoughts: “the state can do a lot to us, but they cannot beat our children!”

The following day theatres went on strike and students occupied university campuses. 17th of November 1989 was Friday and the National Theatre at Narodni street has been sold out. During the break the actors went out for a cigarette, they saw the peaceful students sitting in the street with candles, bringing flowers to the police man and singing national songs. The actors then return on the stage, casually dressed, and their message to an audience was simple: “we can no longer play our piece because the real drama is being performed on the street right now. And we should support the students”. The theatres were offered to the society for discussions with same topic: what’s next? 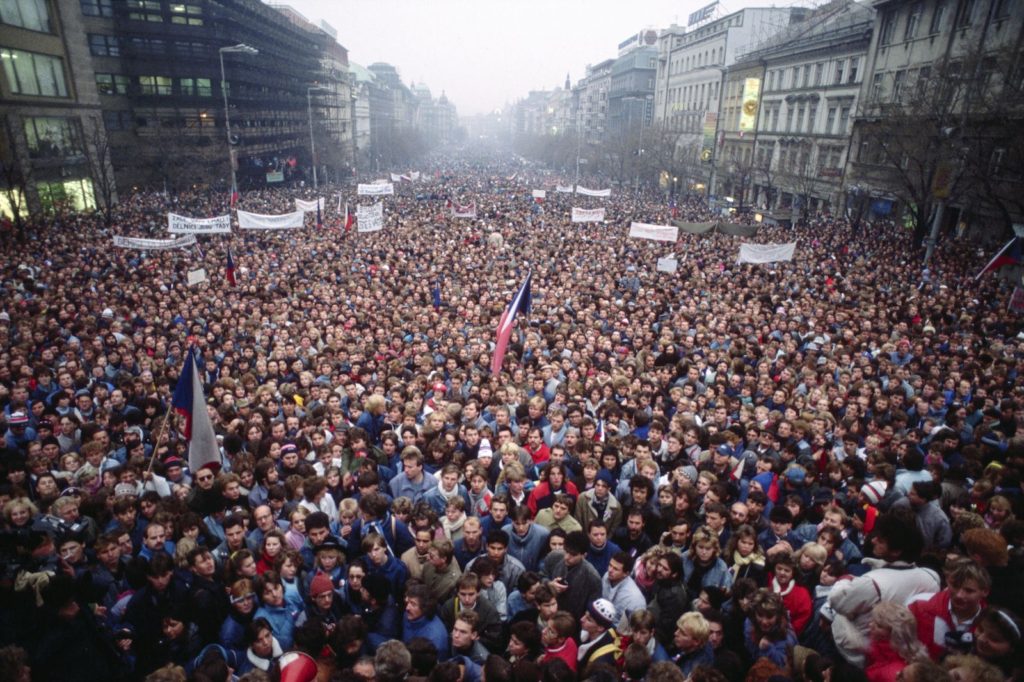 250 000 were protesting in the Vaclavske Square.

The protests continued in the upper part of Vaclavske Square, right by the statue of King Saint Wenceslas (Vaclav), a patron saint of the nation. Czech people could be little superstitious, hoping that Saint Wenceslas will save us in times of danger. Of course he never showed up and it is always up to the people to fight for their freedom and democracy. Personally, I am very proud that the protests were organised in very peaceful way. Slogans say it all: “we don’t want a violence”, “we have empty hands”, “Freedom” or “free elections”.

Within days hundreds of thousands of people were on the streets, ringing the keys.  When some pass-by people stopped to support the strike, they obviously didn’t have candles or flowers, but everybody had keys in their pockets. And the symphonie of ringing keys became a sound of upcoming freedom. Eventually 250000 people were striking in the Vaclavske Square on a week days. On weekends general strikes were organised in a huge open space in Letna park, where up to 1 000 000 protesters gathered. Because of the constant pressure, the Communist Party agreed to hold free elections. In December, dissident playwright Václav Havel was elected president by the country’s Federal Assembly and democracy was restored. 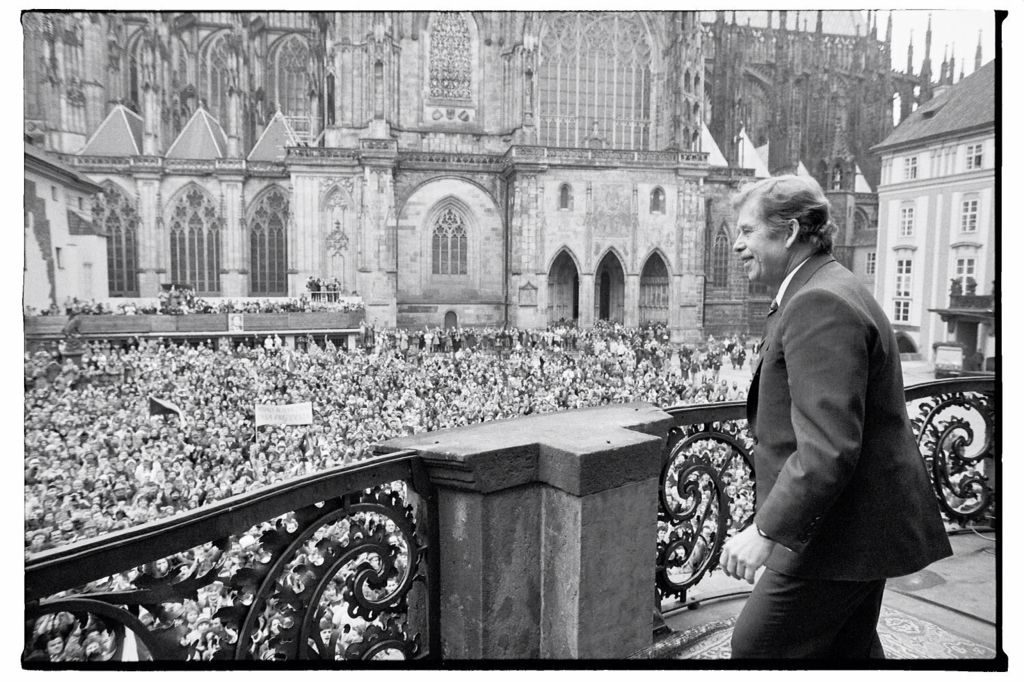 Vaclav Havel during his first public speach as a president on the balcony in the courtyard of the Prague Castle.

Yesterday, 16th of November 2019, another protest was organised at Letna park in a peaceful spirit. The gathering of 257 000 people has begun with a minute of silence for the political prisoners and surpressed countries. The goal of this act was to remind our politicians those important values, such as truth, freedom, honesty and keeping the promises. From the speakers we didn’t only hear the criticism but also a voice for cooperation among the political parties, motivation for moral people in stepping into politics and that young people should be more active in building our democracy.

It seems that we have to repeat values of freedom over and over again. 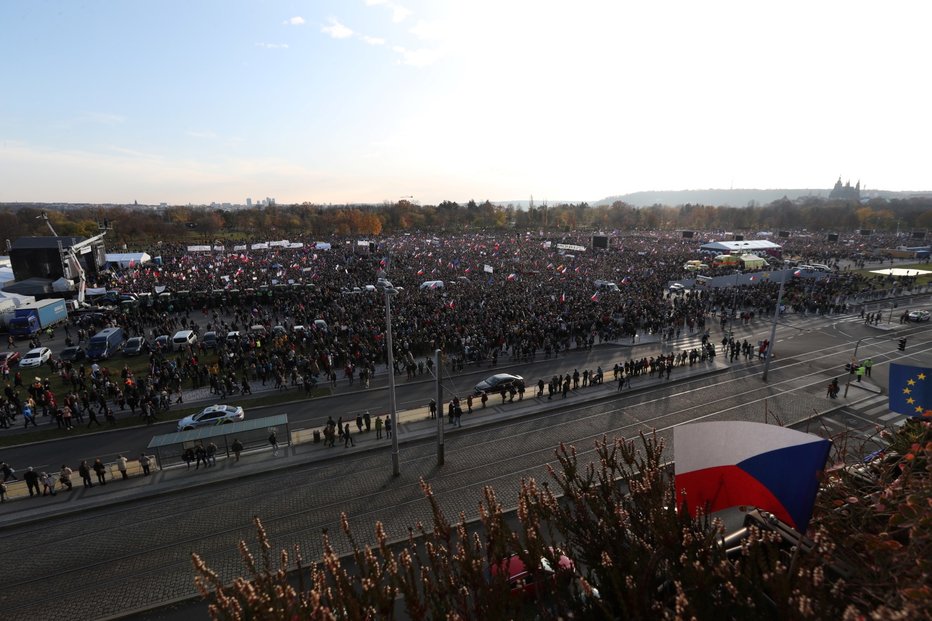 Learn more about the recent history of former Czechoslovakia during our Communism & Bunker Tour.