At around midnight on 20th August 1968 approximately half a million soldiers from East Germany, Bulgaria, Hungary, and Poland rolled across the border into the Czechoslovak Socialist Republic at the behest of the USSR in order to quell the radical reform policies of Czechoslovak Communist Party leader Alexander Dubček, and it began one of the darkest periods in this country’s history.

There have been a couple of previous posts about the Prague Spring invasion and aftermath on this blog, but it’s never a bad idea to remember the bad things that happen, as otherwise we’re doomed to repeat them. So for those that know nothing about the subject, here’s a quick recap.

Alexander Dubček was installed as leader of the Czechoslovak Communist Party by Leonid Brezhnev at the start of 1968 in order to prevent splits in the party becoming too great to repair. He was considered a perfect choice as he’d been educated in Moscow, spoke fluent Russian, and was a staunch party supporter and committed Marxist. However he wasn’t the safe pair of hands the overlords in Moscow had envisaged. 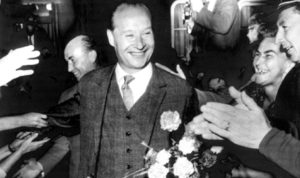 The ‘problem’ with Dubček was that he committed himself to a radical reform of the whole system, as he felt it was time to enter the modern world and leave behind the brutal excesses of the past – after all, socialism had been officially achieved in the country years earlier, so surely now was the time to give the people some of the freedom that was supposed to come with it.

The first step was to effectively end censorship of the media, even if no official announcement to this effect was made initially. This understandably led to the media starting to talk about previously taboo topics, and even led to them criticising the party as they began to realise they really weren’t going to be punished for such things. There was also more discussion about what was happening outside the country, and major international events were talked about openly in the media. 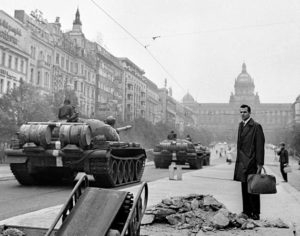 Life goes on during the invasion

He then pushed through a law guaranteeing freedom of speech, and even started offering freedom of movement and travel abroad for common citizens. This, coupled with allowing small scale enterprises permission to operate, allowed the people freedoms that even a year earlier would have been unthinkable.

This all worried the leaders of the Warsaw Pact neighbours, as all of this freedom stuff could easily get out of hand if it was allowed to go on unchecked, and Dubček was advised to stop with his foolishness and take proper control of his country several times, but each time he refused as he could see real progress and something that could almost be considered happiness amongst the people.

Of course, this nonsense could never be allowed to continue, and after repeated warnings the Warsaw Pact invaded and deposed Dubček so that proper order could be restored. The invasion itself was mostly peaceful, although this was because the Czechoslovakian people were ordered not to fight back by their leaders, but 72 civilians were killed, and another 700 wounded.

It would be another 21 years before the Communist yoke was finally thrown down for good.