A lot of travelers have probably experienced this situation. You just came to an entirely foreign city and you are feeling tired and confused. You withdraw the first foreign money from an ATM. Then you try to count how many euros, dollars or rubles that approximately is, but you still have a hard time estimating how much you can actually buy for that amount – after all, the prices of bus tickets or Big Macs vary in different places. So you, still a little puzzled, take the first taxi to the hotel. You pay 1000 of something to the driver. Then you ask a local for the normal prices for such a ride and you learn that it was twice overpriced. Welcome to Prague.

The mini internet series Praha vs. Prachy (Prague vs. Cash – available with English subtitles) recently got a lot of attention in the Czech Republic after it revealed the manners of some of the most unscrupulous taxi drivers that operate in the center of the capital. It showed people being charged 800 crowns (almost 30 euros) for a short ride from the Old Town Square to the Wenceslas Square, which is a distance normally walkable in 5-10 minutes. It showed how aggressive some of the drivers get when confronted for their behavior as well as the utter inability of the authorities to fight against these thieves in yellow cars. The document also pointed out that these overpriced fees are often not properly taxed.

Interestingly enough, the drivers don’t try to hide their activities even after being exposed to the public. In arguments, they often praise the free market, which in their twisted logic means that you can offer anything and anyhow and as long as somebody buys that, it is completely OK. “You want to prohibit me to stand here and charge this amount? You are worse than a communist,” they would argue, together with remarks about the rich travelers that don’t care about the money anyways.

As a tour guide of the Prague Extravaganza, I started to notice specific cars and faces of these rip off drivers who are often waiting for their victims just next to our usual route through Parizska street and near our meeting point for Charles Bridge & Prague Castle Free Tour as well. The taxi drivers park there even though they are actually prohibited to do so, playing hide and seek with the police. Sometimes their behavior borders an absurd comedy. For example, the drivers were constantly altering a sign prohibiting them from entering the Karlova Street. The authorities reacted by putting the sign higher and higher so eventually the sign was only reachable with a stepladder. 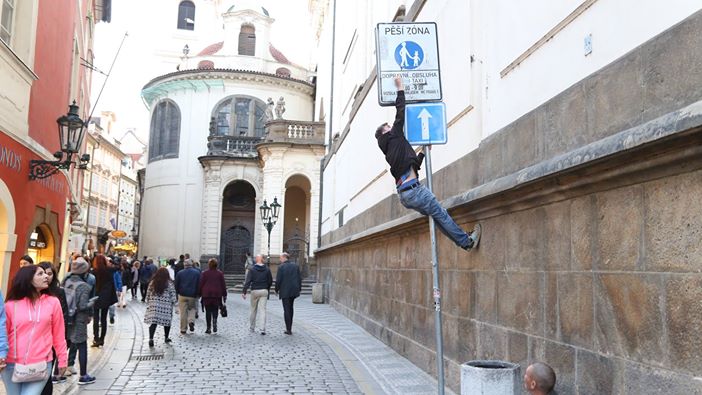 Funny as this may look, this little gang of corrupted taxidrivers has been a problem in Prague for years and the City Hall steps to prevent this nasty phenomenon have not yet been much fruitful. The incumbent Prague mayor reacted to Praha vs. Prachy series by promising additional psychological and topographic tests for the taxi drivers in the city. However, many taxi drivers argue that such procedures will complicate the position to the ones that drive for fair deals and will fail to prevent the taxi gang in pursuing their criminal activities.

Naturally, it is only fair to say that most of the taxi drivers in Prague are honest and that the reputation of this profession is being spoilt by a group of some twenty people – after all, after seeing the documentary featuring a couple of profaned faces, one is already able to identify these in the city center by his naked eye. Therefore, I am not warning you not to take taxis in Prague. However, you should be aware of this group that is operating specifically in the center of the city. You can always find renowned taxi companies on the web or you can ask for them in your hotel. Other than that, it just suffices to remember that a kilometer in the city center should cost you around 28 crowns (a euro) plus the entrance rate (usually around 40 crowns) and definitely not 200 crows.

3 Comments On “Prague vs. Taxi: Drivers in the city center rip tourists off money”