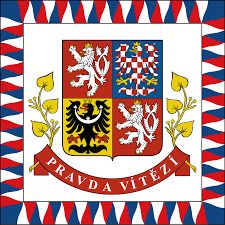 Truth prevails (Pravda Vítězí) on the banner of the President of the Czech Republic.

Jan Hus lived on the turn of 14th and 15th century, when the Czech nation was recovering from the death of the greatest king, Charles IV, and Europe from the Black Death disease. People lived in fear and poverty. But Roman Catholic Church was giving them a hope… excuse me, it was not giving but selling.  The Catholic Church came to desperate people with tickets to heaven and the campaign was presented in latin language. The priests were selling these indulgence tickets in the church. Inspired by John Wycliff, Jan Hus criticised the Church for being greedy, dishonest and for having two popes at the same time. Jan Hus translated bible from latin in the Czech language and he also simplified the language, so it was easier for people to learn reading or writing. However, most of the working class people couldn’t read at all, so Master Jan Hus decided to open free lectures of bible in the Bethelem Chapel in Prague. He influenced lots of people, who stopped buying tickets to heaven and followed him instead. He dedicated his life to the Truth, he preached the Truth and finally he died for the Truth. 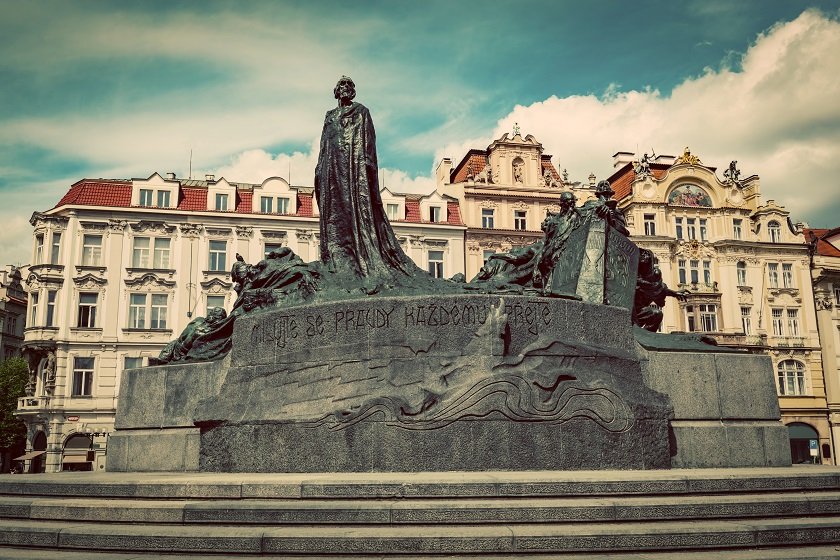 Memorial of Jan Hus in the Old Town Square carries important message: Milujte se a pravdy kazdemu prejte (love each other and wish the truth to each other).

Obviously when Jan Hus started with his criticism of the Church, he made lots of enemies. One day he was invited for the religious council in town Konstanz, Germany. The preacher took the opportunity to share his revolutionary ideas and traveled there. After his arrival he was sentenced to jail and because he didn’t abandon his believe, they burnt him alive as a heretic on 6th of July 1415. But his message remain alive until today after 605 years.

Today, the Czech Republic is one of the most atheist country in the World. In 2011, according to the census results, there were 20,8 % religious people, 34,5 % non-religious people and 44,7 % people who ticked the option “Other”. It looks that nearly half of the Czechs believe in the “Other” religion. And what does this “Other” religion mean? There are groups of people who call themselves Druids, New Slavic Pagans, Cult of Wolves, Church of Live Stone, Church of Militant Atheists, Scientologist Church (hello Tom, if you read), there are Buddhist, Zen and Hindu centres, one ashram. Some people often tell, they believe in Higher Order. If you ask them what that means, they tell you they don’t know. Btw, if you had an idea about establishing new Church, come to the Czech Republic! Czechs are obviously looking for something. Actually, it is very good that they are looking for.

After 41 years behind the Iron Curtain nobody can blame Czechs that 34,5 % are not religious and nearly half of the Nation choose the “Other” religion in Declaration of Faith. Despite the fact that majority of the Czechs are atheists or agnostics, on 6th of July they still celebrate Master Jan Hus, a Roman Catholic priest, Czech medieval religious thinker, university pedagogue, reformer and preacher, who lived the truth and died for the truth more than 600 years ago! This bank holiday should remain us to stand for our believe, like Jan Hus did.